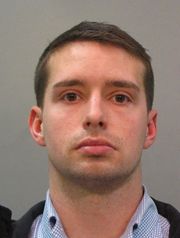 Atlanta, GA: Eric Parker, 26, who has been charged with third-degree assault in the attack of Indian Sureshbai Patel in Madison, AL entered a plea of not guilty in court Tuesday, according to CNN. He waived arraignment, according to Limestone County court documents.
A trial by judge is scheduled for April 29.
Madison’s police chief has recommended that Parker be fired. He posted bail of $1,000 last week and was released from jail.
Patel family’s attorney Hank Sherrod said Tuesday the grandfather was transferred to a rehabilitation facility on Monday. “He has a long, difficult and uncertain rehabilitation process ahead of him.”
Meanwhile, an Internet fundraiser on Gofundme.com to collect contributions for Patel’s medical treatment has raised $189,102 by Tuesday night against a target of $100,000.
However, Parker also found support among some people who set up crowd-funding initiative for him on Indiegogo.com. It had brought in $3,301 as of Tuesday night.