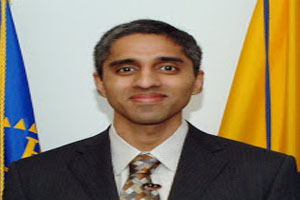 Washington, Nov 15 (IANS) President Barack Obama plans to nominate Dr. Vivek Hallegere Murthy, the Indian-American head of a doctors group that promotes his signature healthcare law to be the next US surgeon general.

Murthy is a hospitalist at the Brigham and is co-founder and president of Doctors for America, a Washington, DC-based group of 16,000 physicians and medical students that advocates for access to affordable, high quality health care.

If confirmed by the Senate, Murthy will replace Regina Benjamin, who was appointed by Obama in 2009 and left her post last summer. The job focuses heavily on public health issues.

Murthy was appointed to the President’s Advisory Group on Prevention, Health Promotion, and Integrative and Public Health in 2011. The prevention group was created as part of the Affordable Care Act health reform law.

His group, Doctors for America, was originally called Doctors for Obama and helped to campaign for Obama’s election.

Murthy co-founded VISIONS Worldwide in 1995, a non-profit organization focused on HIV/AIDS education in India and the United States, where he served as President from 1995 to 2000 and Chairman of the Board from 2000 to 2003.

“I am confident that these outstanding individuals will greatly serve the American people in their new roles and I look forward to working with them in the months and years to come,” Obama said in announcing Murthy’s appointment along with three other key posts.

The announcement came shortly after Obama acknowledging that his administration “fumbled” in the troubled rollout of his healthcare law offered a fix that would allow insurers to keep for another year people on plans that were to be cancelled for not meeting minimum standards under the new law.

In the midst of mounting criticism of the troubled healthcare website, former President Bill Clinton had Tuesday suggested that Obama should make sure Americans can retain their current health insurance plans, even if it means revamping the Affordable Care Act.

“I personally believe, even if it takes a change to the law, the president should honour the commitment the federal government made to those people and let them keep what they’ve got,” Clinton told OZY, a news website.