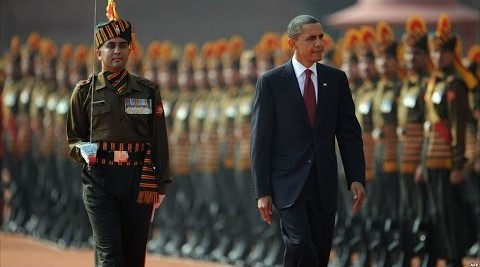 New Delhi, Jan 24 (IANS) Over 1,000 NSG snipers and 44,000 Delhi Police and paramilitary personnel will guard the capital on Republic Day, while 15,000 CCTV cameras will keep watch to ensure a safe visit of chief guest US President Barack Obama.

The National Security Guard snipers will maintain a hawk-eye vigil from high-rise buildings within a two-km radius of Rajpath, from where the US president along with President Pranab Mukherjee and Prime Minister Narendra Modi will be watching the Republic Day parade.

Police said the remaining 44,000 security personnel — around 10,000 from the paramilitary forces and 30,000 from Delhi Police — will be deployed on the streets of the capital starting 5 a.m. Jan 26.

Sources said the central, north and New Delhi districts will be manned by over 20,000 security personnel.

Around 20,000 personnel will be deployed at specific locations from Jan 25, the day Obama arrives in Delhi and the number will almost double Jan 26, Delhi Police said.

Around 15,000 newly-installed CCTV cameras will be used to keep watch in areas where Obama’s cavalcade will move as also some other roads and markets.

Rajpath, the three-km stretch which is the main venue of the Republic Day parade, has nearly 160 CCTV cameras. One camera has been installed every 18 metres.

A Delhi Police official, who did not want to be named, said camera footage may be shared with the US Secret Service.

Officials said that as part of heightened security arrangements, the no-fly zone for civilian aircraft will extend to a 500-km radius of Delhi Jan 26 and will cover cities such as Agra and Jaipur, and even areas along the border with Pakistan.

The radius of the no-fly zone for earlier Republic Day functions used to be 300 km, they said.

A seven-layer security ring will guard the enclosure that would be used by Obama, Mukherjee and Modi.

The enclosure will be bullet-proof as the US president will be in an open air setting for over one-and-a-half hours, something unprecedented in his visit to a foreign country, officials said.

Before Obama’s plane lands Jan 25 at the Delhi airport, the area will be taken over by Special Protection Group (SPG) personnel and US Secret Service agents.

India Gate and Rajpath have already been shut for people and the area is under constant guard by security personnel.

The airspace over the capital will be monitored by special radars, they added.

Security arrangements at ITC Maurya, where Obama will be staying during his three-day visit, are being monitored on a daily basis.

Mandi House and Pragati Maidan stations will also be closed for people for one hour between 10.45 a.m. and 11.45 a.m., a Delhi Metro official said.