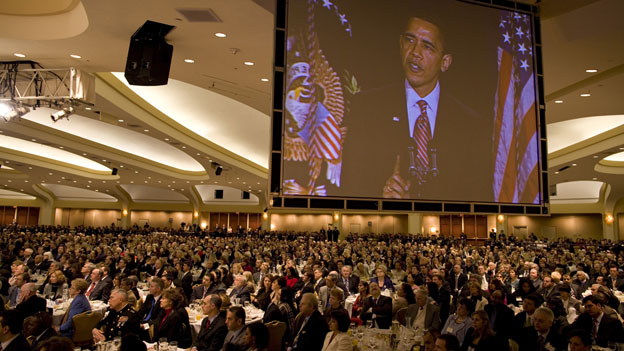 Washington, Feb 5 (IANS) US President Barack Obama Thursday invoked India’s example to make a plea for religious freedom and how faith leads people to do good and what’s right but that faith also can be twisted to be used as a weapon.

In a 25-minute address to the National Prayer Breakfast, Obama who last month visited India with First Lady Michelle called it “an incredible, beautiful country, full of magnificent diversity”.

But it was also “a place where, in past years, religious faiths of all types have, on occasion, been targeted by other peoples of faith, simply due to their heritage and their beliefs”, he said.

These, Obama said, were “acts of intolerance that would have shocked Gandhiji, the person who helped to liberate that nation,” he said.

“So this is not unique to one group or one religion. There is a tendency in us, a sinful tendency that can pervert and distort our faith,” he told the meeting, attended by several international leaders including the Dalai Lama.

“We see faith driving us to do right. But we also see faith being twisted and distorted, used as a wedge – or, worse, sometimes used as a weapon,” Obama said.

“From a school in Pakistan to the streets of Paris, we have seen violence and terror perpetrated by those who profess to stand up for faith, their faith, professed to stand up for Islam, but, in fact, are betraying it,” he said.

Earlier this week, a senior aide of Obama had said that Obama’s last speech in New Delhi referring to the need for religious tolerance in India had been misconstrued by some commentators as a kind of a parting shot.

“I think that’s been somewhat misconstrued, if you look at the context of the entire speech, it’s really about inclusivity. It’s about the power of diversity,” Phil Reiner, White House’s senior director for South Asian Affairs, told foreign media.

As he began speaking, Obama called the Dalai Lama a “good friend” and “a powerful example of what it means to practice compassion and who inspires us to speak up for the freedom and dignity of all human beings”.

Earlier as he arrived, Obama nodded and smiled at the Dalai Lama, waving after clasping his hands together in a bow-like gesture toward Tibet’s exiled spiritual leader.

The two did not meet directly, but senior Obama adviser Valerie Jarrett was seated with the Dalai Lama at a table in the front row across from the president.

Despite Beijing’s objections, Obama has met the Dalai Lama previously three times, most recently in February 2014.

As he arrived at the Washington Hilton Hotel for the meeting, two groups of supporters of the Dalai Lama chanted to drum beats and waved banners and Tibetan flags on the street outside the hotel.