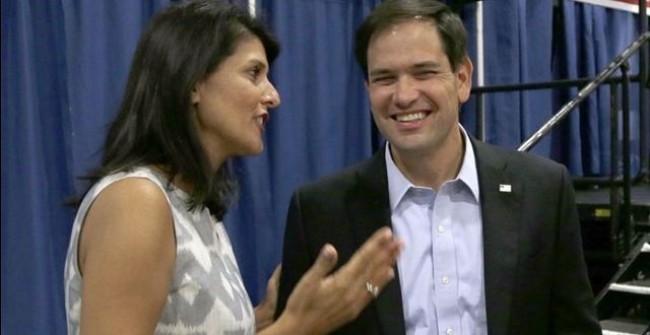 Born Nimrata ‘Nikki’ Randhawa, the daughter of Sikh immigrants from India told a crowd of supporters Wednesday night that she chose to back a candidate who can “show my parents that the best decision they made for their children was coming to America.”

The Florida senator, in her view is best suited to restore Republican party’s principles of limited government and cutting debt to Washington.

“I want a president who understands they have to go back to Washington DC and bring a conscience back to our Republicans,” Haley said.

Haley, the state’s most popular Republican politician in polls and a rising national party star often mentioned as a likely vice presidential pick, was South Carolina’s most coveted Republican endorsement in the 2016 presidential race.

“She embodies for me everything that I want the Republican Party and conservative movement to be about,” Rubio told the Chapin crowd. He also made frequent references to their similar immigrant backgrounds.

The Florida senator needs to do well in South Carolina after finishing fifth in New Hampshire following a rattled debate performance.

Haley who gave the Republican response to President Barack Obama’s State of the Union last month wherein she urged voters not to listen to the “angriest voices” has criticized Trump for his combative campaigning.

He had previously called Haley a “friend” even when invoking her “anger” comments about him. “We can’t have that, we need strong strong immigration policies,” he added.

Former Florida Governor Jeb Bush told reporters on Wednesday that he was “disappointed” he didn’t get her backing.

“I’m disappointed, she’s a very good governor and should I win the nomination there will be a role for her in the campaign, trust me, she’s a great person,” he said.

“Marco can unify our party. His optimistic message is bringing voters from across the party lines, from across different demographic groups,” said Jindal who himself dropped out of the presidential race in November after failing to get any traction in the polls,” Jindal said.