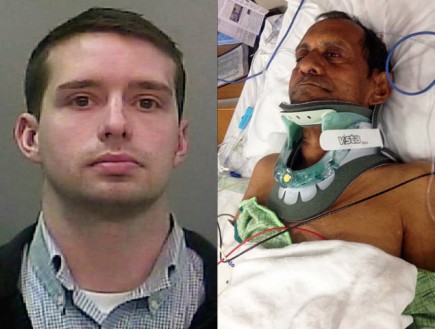 Washington, Jan 14 (IANS) To the shock of the Indian American community, a US judge has acquitted an Alabama police officer who slammed a visiting Indian grandfather to the ground while taking a walk outside his son’s home.

Turning down the prosecutors’ plea for a third trial after two mistrials, Haikala late on Wednesday filed a 92-page opinion, saying: “The government has had two full and fair chances to obtain a conviction; it will not have another.”

“The result in this case is by no means satisfying. Hindsight brings clarity to a calamity,” she wrote in the conclusion of her opinion.

“Mr. Patel’s celebrated arrival in this country to begin a new life with his son was interrupted in two tragic minutes.”

“If Mr. Parker or Mr. Patel could take that time back, both would surely do things differently and avoid the events that have forever changed both of their lives.”

“Mr. Patel had-and has-just as much right to be free from excessive force as every citizen of this country. He is welcome here, and it is appropriate to grieve his injury.”

“However, that injury, standing alone, does not provide the basis for a criminal judgment against Mr. Parker under 18 U.S.C. 242.”

On Wednesday, federal prosecutors had filed a motion against acquittal, arguing that a reasonable jury could view the video and listen to testimony and decide Parker intentionally used excessive force in slamming Patel into the ground.

Parker twice testified that he lost his balance and fell. He also testified that Patel repeatedly jerked his hand away from Parker. “It concerned me that he was going for that weapon I presumed he had,” testified Parker.

Patel, who had just arrived from India to help care for his grandson, testified he does not speak English and did not resist.

“I did not try to run away but I did go back a couple of steps to show them my house, my house,” testified Patel through an interpreter at the second trial. “They put their hands on me and I was just standing and did not move.”

On the morning of February 6, a neighbour called police to complain of a “skinny black guy” who is “just kind of walking around close to the garage”.

Police found Patel walking along the sidewalk. But Patel could not answer questions and the confused encounter ended with Patel in an ambulance.

Cheng Tao, the neurosurgeon who operated on Patel at Huntsville Hospital, twice testified that the takedown left Patel unable to walk or grip his hands.

Tao told both juries that he replaced one vertebra in Patel’s neck with a metal cylinder and plate.

The case drew international interest prompting Governor Robert Bentley to issue a letter apologising to Patel and to India.