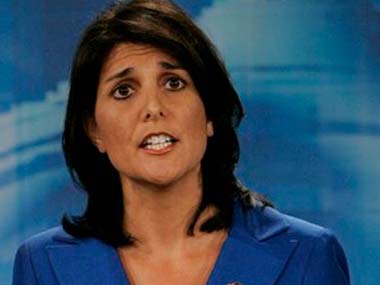 The Nov 12-22 trip is intended to make a “first impression” that sells South Carolina as a tourism destination and a place to do business, local newspaper The State reported citing an official.

Haley, who met Prime Minister Narendra Modi in New York in September, was cited by the State as telling reporters Thursday that she did not know what to expect from the trip.

“But when I met with the prime minister, we had a lot of conversations.”

Haley said she sees opportunities in pharmaceuticals, automotives and agriculture.

“There’s a lot that India is doing very well that they now want to start investing in the United States,” she said.

“That’s really where my goal is: where can I get them to invest and do more of those things.”

US exports to India have increased by 127 percent since 2006, outpacing the growth in all other foreign exports combined, which only grew by 50 percent during the same time period.

The trip’s schedule is “nothing short of gruelling” with 90 planned meetings and events, including 40 on Haley’s itinerary, Hitt said.

State Commerce officials have travelled to India four times in two years to prepare for the trip, but Haley’s visit will garner media attention there, he said.

The trip next week is a chance for South Carolina to make a “first impression” on India businesses and commerce officials, Hitt said.

“This is our way of pushing out a message that we’re serious about our relationship with India.”

South Carolina economic development organizations such as the Upstate Alliance, The LINK Alliance and the S.C. Power Team, as also companies interested in exporting goods to India will join the trip.

Hitt said state officials are keying in on the Indian manufacturing and pharmaceutical sectors while there, hoping to tap into an “emerging” market.

While in India, Haley will address several business organizations and, with Duane Parrish, state Parks, Recreation and Tourism director, pitch the state as a tourist destination to several India-based travel media.

A group of state legislators also will attend the Aeromart Summit, an international business summit for the aerospace industry.

The trip marks the second time Haley has travelled to her parents’ homeland that she last visited when she was 2 years old.