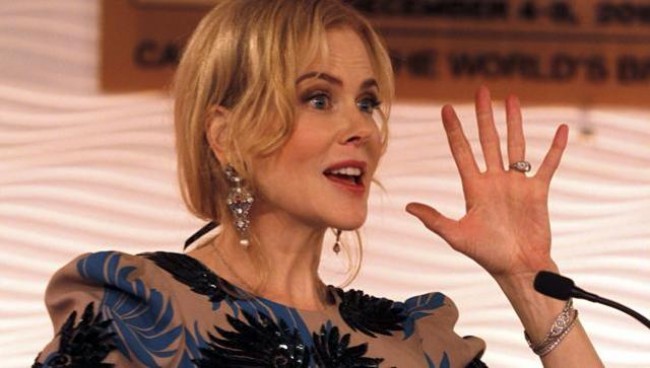 New Delhi, Dec 5 (IANS) Nicole Kidman first explored India as a teenager, and the 48-year-old Hollywood actress can’t stop raving about it till now. The Oscar-winning star exclaims that she feels “incredibly comfortable” in the country as she likes to immerse all her senses in the cauldron of different cuisines and cultures.

“I have been coming to India since the age of 17. I wanted to explore the world as a teen and India was one of the destination. I loved different food, clothes and smell….I travelled and absorbed culture. I feel incredibly comfortable in India,” Kidman said.

The Hollywood actress, who has honours like an Academy Award, a Golden Globe, a BAFTA Award and a Berlin Silver, was in India this time to share her journey as an actor at Hindustan Times Leadership Summit 2015 here on Saturday.

Coming from Australia, Kidman catapulted to fame as the female lead opposite Val Kilmer in “Batman Forever” in 1995, and went on to carve a place for herself in Hollywood with films like “Eyes Wide Shut”, “Moulin Rouge!” and “The Hours”.

Kidman asserts that she set her eyes on showbiz as she wanted to explore different stories, cultures and countries.

“I wanted to be what I call an international actor. I wanted to be able to work in all countries, play all different roles, telling many different stories and part of my drive is the idea of us all coming closer through art,” she said.

Kidman is not all about glamour and glitterati. She is known for humanitarian work and has been a goodwill ambassador for the UN Development Fund for Women since 2006.

According to her, the whole world is one big family.

“I do view the world as a family and I know that sounds simplified and the more you can keep it simplified is better. I always speak passionately about women’s issues and women’s rights which I’ve done because my mother was a feminist and I was raised as a young feminist and now I’m in the position to be able to help,” she said.

Hand-written Indian passports are no longer valid for traveling abroad