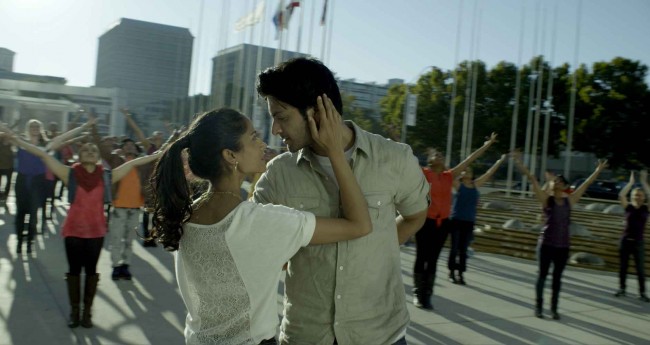 Washington, Dec 7 (IANS) Two Indian-American makers of a new film about immigrants in America believe immigration, which has emerged as a key issue in US presidential elections, is “incredibly critical” for both America and India.

“We think immigration is incredibly critical not just for America but also for India,” says Rishi Bhilawadikar, writer/producer of “For Here or To Go?” a comedy drama set against the backdrop of the 2008 recession about many personal battles faced by immigrants.

“Indian Americans are key contributors to growth and competitiveness,” he said in an interview with IANS pointing to Sundar Pichai and Satya Nadella, CEOs of Google and Microsoft respectively as examples.

“As artists we hope a story like ‘For Here or To Go?’ humanises the situation and can contribute towards action in bringing about sensible immigration reform,” Bhilawadikar said.

Rucha Humnabadkar, San Francisco-based director of the film, agrees, saying one of their goals “is to show that the immigration debate is about people and people’s lives and not just numbers or policy. We hope to put a human face to this largely political issue.”

“Immigration is a complex demographic phenomenon and there needs to be a broader discussion that goes beyond the theme of illegal immigration to the US,” she said.

“Presidential candidates must take a more comprehensive approach, which involves attracting and retaining the brightest and smartest minds from around the world, which is what will continue to help this nation to truly remain innovative and drive sustained economic growth.”

The film tells the contemporary story of ambition and ambivalence of Desi immigrants, “Americans in mind and Indians at heart,” through the struggles of Vivek Pandit, a young Silicon Valley software professional awaiting the renewal of his work visa.

Bhilawadikar, who came from Mumbai to study interactive storytelling and video game design, said the idea of the film started with his own “experience of trying to be an entrepreneur as an immigrant in 2007, many of which still exist.”

“At the time reverse brain-drain phenomenon was picking up and a lot of American educated immigrants had started returning to their home countries largely due to the immigration process.”

“The story examines this fascinating dilemma of millions of people trying to make a home away from home and the choices they face today,” he said.

This experience “exemplified by the Indian ethno-bubble of the Silicon Valley,” Bhilawadikar said, “started getting captured in a blog – ‘Stuff Desis Like” and later into the script of ‘For Here or To Go?'”

“Rishi and I have the advantage of being exposed to both worlds this story straddles,” said Humnabadkar, who hails from Pune. She decided to direct the film when she realised “it wasn’t just my story but also that of many friends and family members.”

“At the heart of it, it’s a story about cultural assimilation in a foreign land, and asks the question where is home and where do you belong?” she said.

Interviewing several San Francisco Bay area Indian immigrant families, they came across stories of “the visa struggles of immigrant entrepreneurs, students victimised in the Tri-Valley university scam, the ‘reverse brain drain’ phenomenon during the recession, and the tragic wave of Sikh shootings that followed 9/11.”

“We understood that the film we needed to make would be the first of its kind, a narrative that unifies the experiences of a very strong and growing South Asian minority across all strata of American society,” Humnabadkar said.

When asked about the ongoing debate in India about growing intolerance, both Bhilawadikar and Humnabadkar felt they didn’t “qualify to make comments” as it was “something that’s not part of our everyday reality.”

“That said, some of the reactions that I’ve read to the comments made by such accomplished names like Shah Rukh Khan or Aamir khan do little more than proving their points,” said Bhilawadikar.

Humnabadkar agreed, suggesting a “healthy public debate” about the subject. “It is important for a democratic nation to protect its secular fabric, be it discussion of immigration in the US or intolerance in India. We must find unity in diversity.”

“As immigrants from all walks of life know so well, every journey brings forth new stories to tell,” said Humnabadkar, when asked what next. Her first feature film won the Jury Award at the 10th Seattle South Asian Film Festival, 2015.

“Many Cups of Chai Films will continue to look to tell fresh, contemporary stories which are relevant to what’s happening in our world today,” said Bhilawadikar.

After “an amazing festival run,” he said, “As a tiny team of two, we will continue to search for the right investors and collaborators that’ll help us release the film worldwide.”

Disrespecting Diwali: A Look at Our Cultural Hypocrisy