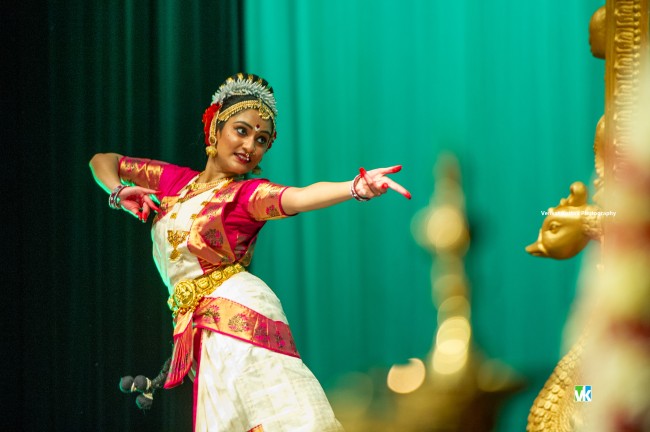 During the social hour, the guests mingled among themselves, admired the Lord Ganesha idol, big pictures of Akhila and artistic décor on the tables, in the hallway and enjoyed the refreshments.

The program was impressively emceed by Meenu Reddy and Mahima Siripurapu, who introduced dances in the repertoire and also the guest speakers. After the prayer song, Akhila in a fetching dance costume and with attractive facial, hair, hands and feet accoutrements performed the first Ananda Nartana Ganapathym dance, which was a customary offer of salutations to Lord Ganesh seeking His blessings. This was followed with scintillating dances Kamakshi Stuthi and Kulukaga Nadavaro keerthanas composed by Muthuswamy Dikshitar and Annamacharya respectively. Akhila went on to perform Tharangam (Marakatha) Padam (Yevvadey Vadu); Shankara Shri Giri, Thillana and concluded with Mangalam. Four of these dances were conceptualized and choreographed by Guru Neelima. In performing all these dances, Akhila showcased 12 years of her extensive training, discipline, unflinching dedication, passion, commitment, and love for the art of dance and drive for excellence in achieving her goal. She dazzled the audience with her sinuous grace, synchronization of her footwork with the swaras and jathis; emoting superbly with facial and hand gestures and ending in awesome statuesque poses. In Tharangam; her dance on brass plates was hypnotic! The receptive audience was fully enthralled and applauded enthusiastically with each dance performance. 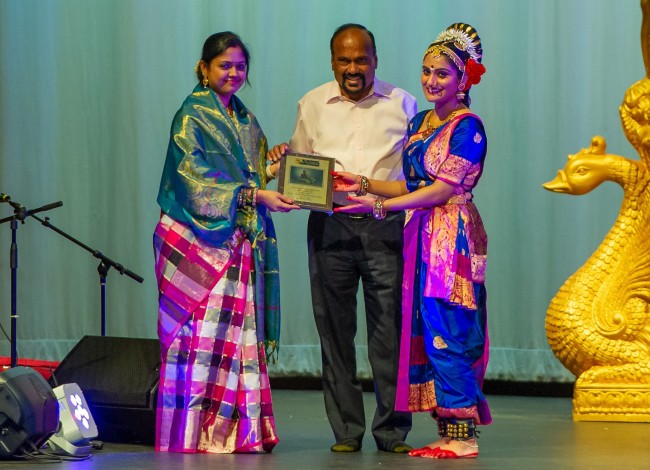 Famed Sri G.S.Rajan is an eminent world music composer, classical flautist and senior arts administrator, who has performed in prestigious festivals around the globe and won numerous honors and Awards. He has received praise from Pandit Ravi Shankar and maestro Zubin Mehta. Since January 2013, he has moved to Atlanta, GA and works as a composer, flautist and teacher.

Noted Mrudangam, ghatam and thavil player Sri Santosh Chandru has accompanied many renowned artistes in dance and music fields over the years. He has performed at many prestigious events including Cleveland Thyagaraja Aradhana festival and is a regular accompaniment for Padma Vibhushan Dr.K.J Yesudas during his classical concerts in the United States.

Smt.Gayatri Vasant is a Master of Fine Arts in Bharatanatyam and also has a Diploma in Carnatic music.She has sung for more than 25 arangetrams in and around USA. Smt.Gayatri runs Carnatic music classes in Alpharetta.

Smt.Jassotha Balasubramaniam is a proficient violin player,trained by eminent Gurus.She is also receiving advanced vocal training from Smt.Shankari Krishnan.She also holds a Business Degree from York Univ.,Toronto,Canada.Jassotha has accompanied local artists on the violin and also been on orchestra team at many dance recitals.

Akhila’s brother Varun and cousin Akshara in their brief remarks, peppered with humor, lavished praise on Akhila for her passion and love for dancing and tenacity in accomplishing her goal.

Akhila’s friends Meenu Reddy; Mahima Siripurapu; Juhitha Porika; Anjali Atluru; Meghana Nuthivana; Yamini, Sanjana Adepu came on stage. On behalf of her friends, Yamini said that the greatest value of a friend is not what you get from him/her but the better person that you become. She complimented Akhila for her friendly nature and team spirit and her single-minded pursuit of her goal in performing the Rangpravesham and inspiring other dance students. “She always gives 100% in her performances”. 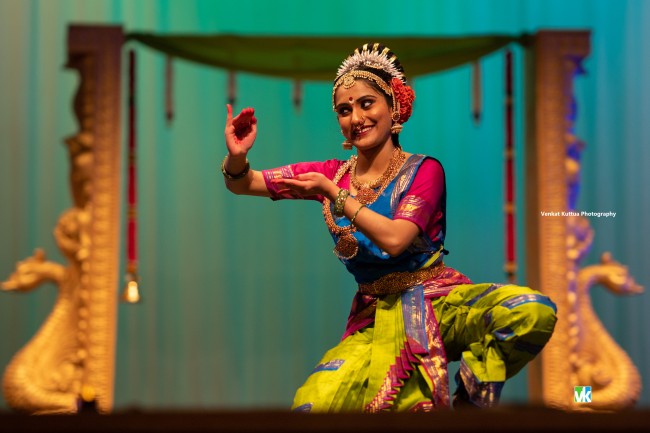 After Mangalam, Akhila, her parents Sri. Arun and Smt. Eeshwari Ballari and Neelima came on stage and felicitated Sri Rajan; Sri Santosh Chandru, Smt.Jassotha Balasubramaniam and Smt.Gayatri Vasant by draping shawls and presenting bouquets to them.

Chief Guest Narender Reddy said his daughter had performed her rangpravesham a few years back so he was aware of what it takes to accomplish that. He said he was proud of Neelima and Nataraja Natyanjali Academy’s laudable role in promoting Indian classical dances, and rich India culture. He noted that few years back musician artistes for Rangpraveshams had to be invited from India but now fortunately high caliber orchestra artistes are all local. Congratulating Akhila and her parents, he advised Akhila,”Consider this not as an exit but as an entrance. Kuchipudi has no age limit. Push the boundaries and never give up.”(Applause)

Vice-President at EBIX RCS, Sri Bhogarao Pappu, who is a well-read scholar, a multi-linguist master in Sanskrit tekuguvtanul, Tamil, Telugu, Urdu, Hindi and Marathi, lauded Akhila for her wonderful performance and blessed her. Blessings also come with suggestions. You shouldn’t look at it merely as performance art.It is a devotional dedication and submission of oneself to the divine. You have to transcend it to a higher plane. We are a part of this vast cosmic dance.

Founder/Dir. of Nataraja Natyanjali Neelima Gaddamanugu has made her Dance Academy a name to reckon with in Atlanta. She started her Kuchipudi journey at the tender age of 4 with Guru Smt.Mythili Prabhakar and later under Guru Sri Dandhibotla Narayana Murthy, a senior student of Guru Padma Bhushan late Dr.Vempati Chinna Satyam.She has given over 300 performances all over India and garnered many Awards and honors. She is a highly creative and innovative choreographer known for several outstanding Kuchipudi compositions. She actively participates in dance seminars and dance festivals in Andhra Pradesh, the birthplace of Kuchipudi.She has organized several fundraisers for social, charitable and religious causes. She started teaching Kuchipudi in Metro Atlanta since December 2003.Her Academy now has 140 students and this year marks its 10th Anniversary.

In her effusive remarks Akhila’s Guru Neelima praised Akhila’s work ethics. “She has never missed a class and many times practiced her art well past midnight. Despite that she aced her academic examinations and successfully completed Rangpravesham. I consider her as my daughter. My Congratulations and blessings to her for graduating today with flying colors.”(Thunderous standing ovation).

Responding a beaming Akhila said ‘I would like to deliver my remarks by first thanking my beloved Guru Sri Sai Baba.My goal today was not only to perform my Rangpravesham but also to inspire others in the audience. I want to thank my parents, members of my extended family, my Guru Neelima; and friends, some of whom are attending from abroad and from other States. I feel blessed because my Rangpravesham dream has come true today.”

Neelima thanked Venkat Kuttua for videography and photography and M K Designs Madhavi Korrapati for beautiful decorations.At the end of the spellbinding and memorable program, delicious dinner catered by Madras Mantra was served to all in the spacious dining hall of the school.

Akhila began her training in Kuchipdi at the age of 6 under the tutelage of Smt. Neelima Gaddamanugu. She has shown a deep passion for the classical art form through the 12 years of intense training. Nataraja Natyanjali Dance Academy has given her the privilege and opportunity to serve the community in several ways. She played a lead role in the Academy’s first dance drama, Hanuman Vaibhavam, to help fund-raising for the construction of Hanuman Temple in Alpharetta, performed for the establishment of the Shantiniketan Rehabilitation Center in India for children with special needs and has contributed to many recitals-raising money for various disaster-reliefs. Recently she performed with renowned classical dancers at Antaram (a classical roadshow led by Suhasini Maniratnam).Akhila looks forward to more opportunities to serve the community through her dancing talent. Currently she is a rising second year Computer Science major at Georgia Tech.