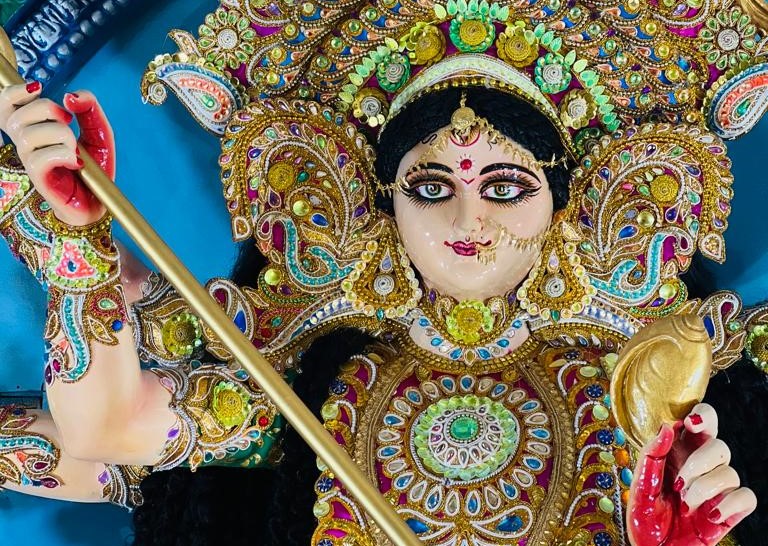 Since its inception, Nandan has been actively organizing charity events like buying foods, packing and distribution at the Atlanta Food Bank; clothes, toys, and other household items consignment for American Kidney Society; blood drive for Red Cross, and other. Nandan has also been celebrating member events like the Bengali New Year, and an annual picnic.

Durga puja is a popular Bengali festival where goddess Durga is symbolizes the victory of good over evil. Although the festival in a true essence of the Hindu rituals. expands over 10 days, at most American Hindu associations, the celebrations are limited to either 2 or 3 days only.  Nandan too, celebrated it on the Saturday, 24th and Sunday, the 25th of September 2022. The event was well organized with food, stalls for shopping and cultural programs performed by children and by the members of the association.

A key highlight of Nandan’s Durga puja is that the idol of the goddess is one of the largest in the North America and certainly the largest in town. Crafted by some of the finest artisans in Kolkata, India, the idol was procured and shipped recently across the oceans.

Prime time of the cultural program was by the drama of Snow White and Snow Dwarves, performed under the directorship of Raka. This was followed by dance programs by Upasana, violin performance by Raunak, and other mesmerizing performances by Pratik, and Anish. Tribute to the lost legends was a live musical program performed by Raka, Tathagata, Debashis, Nabanita, Nisha. The program ended with a dance performance by a group of talented members led by Nivedita, Atanu, Konkona, Santanu, Jhilam, Barnali and Monica.

Nandan extends appreciation to all the volunteers and community workers who helped make the event successful. They look forward to the upcoming festivities of Kali Puja/Diwali on October 22, 2022, at the Denmark High School, Alpharetta Georgia.