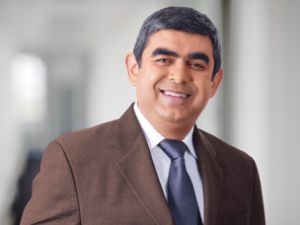 The $8.25-billion IT bellwether declared that to facilitate the smooth transition to Sikka, the company’s first external executive, its co-founder and chairman N.R. Narayana Murthy and another co-founder and vice-chairman S. Gopalakrishnan would step down June 14.

Murthy stepped out of retirement last year to lead the company again during its troubled times.

Sikka, 47, a former executive board member of German software product major SAP AG, will be inducted as a whole-time director on Infosys board June 14 and will take over from incumbent chief executive S.D. Shibulal, who expressed a desire to exit the company before retirement in March 2015.

“I am honoured to lead Infosys, an iconic company built by pioneers in the technology industry. I look forward to working with and learning from talented Infoscions around the world,” Sikka said in the statement.

Sikka, who quit SAP Ag in May, was responsible for all products, including HANA, the German behemoth’s flagship analytic database platform, mobile and middle. He is a doctorate in computer science from the Stanford University, US.

“Computing technology is reshaping every industry across every walk of life. We have a unique opportunity to deliver breakthrough solutions that will bring greater value to our clients, employees, investors and other stakeholders,” Sikka said.

Murthy, who returned from retirement to head the company again year ago June 1, 2013, along with his prodigal son Rohan Murthy as his executive assistant, will continue as non-executive chairman till Oct 10 along with Gopalakrishnan as non-executive vice-chairman.

K.V. Kamath, an external director on the board, will become the non-executive chairman of the board from Oct 11.

“Murthy will be designated as chairman emeritus from Oct 11 in recognition of his contributions to the company,” the statement noted.

The company also announced that board director Srinath Batni will also step down July 31.

The company also elevated a dozen leaders to the position of executive vice-president with additional responsibilities.

“I am pleased with the selection of Sikka as our new CEO. He brings valuable experience as a leader of a large, global corporation. His illustrious track record and value system make him an ideal choice to lead Infosys,” Murthy said.

Troubled by exit of senior executives and below industry performance over the last couple of years, the beleaguered company appointed a nominations committee April 11 to search for a successor to Shibulal from inside or outside the company.

The board, headed by Kamath, with Biocon chairperson Kiran Mazumdar-Shaw and Ashok Leyland former manging director R. Seshasayee as members, selected Sikka after short-listing and evaluating some external and internal candidates.

“The committee adopted a rigorous selection process with the assistance of reputed global executive search and evaluation firms. Vishal brings a unique combination of technology prowess and business acumen. The board is committed to support him to strengthen the company’s leadership in the global technology industry,” Kamath said.

Commenting on Sikka’s selection, Gopalakrishnan said the board has chosen a thought leader who demonstrated how technology could be leveraged to help businesses become more competitive.