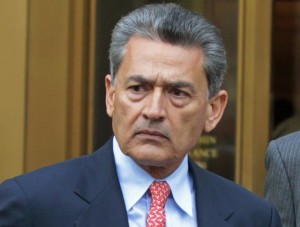 Gupta, the highest-profile executive convicted in a US crackdown on insider trading by Manhattan’s Indian-American prosecutor Preet Bharara, is accused of passing illegal tips to billionaire Galleon Group co-founder Raj Rajaratnam. These included news about Goldman results and a $5 billion investment from Warren Buffett.

Gupta, 65, argued in papers filed with the court this week that there’s no risk he will flee and that he’s likely to win his appeal based on legal errors made in his case. Gupta approached the Supreme Court after the 2nd US Circuit Court of Appeals in Manhattan on May 30 denied him permission to stay free during his appeal.

The full 2nd Circuit has yet to decide whether to rehear Gupta’s appeal of his conviction, which a three-judge panel of that court upheld on March 25.

Gupta claimed wiretaps used in the case against him were improperly admitted. He also argued that he should have been permitted to present evidence of his good character to the jury.

Rajaratnam was separately convicted and is serving an 11-year sentence in a federal medical prison in Ayer, Massachusetts.

The trial judge, Jed Rakoff, has agreed to recommend that Gupta be assigned to a medium-security prison in Otisville, New York, about 70 miles northwest of New York City.