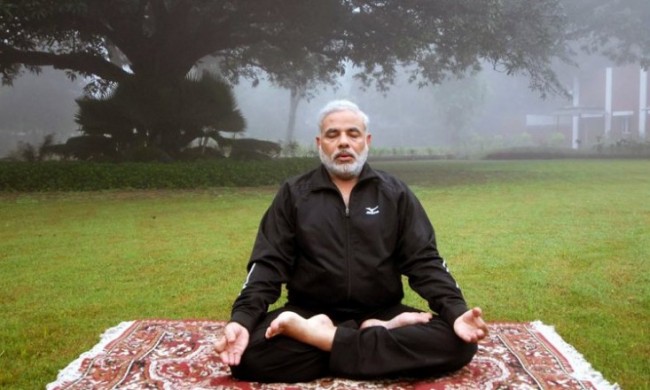 United Nations, Dec 12 (IANS) In a huge global endorsement for yoga, 175 out of 193 members of the UN, countries as diverse as the US and Syria, Russia and Britain, and China and the Philippines, agreed by acclamation Wednesday to declare June 21 the International Yoga Day, recognizing the ancient Indian science’s “holistic approach to health and well-being”.

Indian Prime Minister Narendra Modi, who had proposed holding an international yoga day in his UN General Assembly speech Sep 27, voiced his elation on twitter. “Elated! Have no words to describe my joy.”

The UN General Assembly (UNGA) resolution said a goal of the Yoga Day was the “wider dissemination of information about the benefits of practising yoga would be beneficial for the health of the world population.

“In Sanskrit language, the meaning of the word Yoga, is ‘to join’ or ‘to yoke’,” India’s Permanent Representative Asoke Kumar Mukerji told the UNGA. “We hope that the impact of this resolution will yoke our efforts in the area of Global Health.”

Going beyond the view of yoga as physical and mental disciplines, Modi promoted it as a holistic way of life that stresses “harmony between man and nature” and simpler lifestyles and can help fight climate change.

The resolution for the Yoga Day was cosponsored by 175 of the 193 member nations across the whole spectrum of the globe, bringing together countries from every continent and of diverse cultures and religions. It was adopted by acclamation, without having to take a vote.

Mukerji called it “a testimony to the enthusiastic cross cultural and universal appeal that yoga enjoys amongst members of the United Nations”.

The overwhelming support for the resolution, UNGA president Sam Kahamba Kutesa said, “demonstrates how both the tangible and the unseen benefits of yoga appeal to people around the world”.

“Countless people across the world made yoga an integral part of their lives. Congrats to them!” Modi tweeted. “This will inspire many more people towards yoga. Yoga has the power to bring the entire humankind together! It beautifully combines Gyan (knowledge), Karm (work) and Bhakti (devotion).”

It is estimated that 250 million people around the world practice yoga, over 20 million of them in the US. June 21 has a cultural and cosmic significance as it is the day of the Summer Solstice in the northern hemisphere when the daylight hours are the longest.

UN Secretary-General Ban Ki-moon said in a message: “Yoga can bring communities together in an inclusive manner that generates respect” and can “promote peace and development”.

The diverse benefits it brings, he said, were promoting “resilience against non-communicable diseases” and even helping people deal with stress in emergency situations.

Kutesa congratulated Modi for his initiative for the Yoga Day and commended the Indian delegation for its efforts to make it possible. The diplomatic push of Mukerji and his team brought together the largest number of cosponsors for a resolution like this and had it adopted it in less than three months.

“For centuries, people from all walks of life have practiced yoga, recognizing its unique embodiment of unity between mind and body. Yoga brings thought and action together in harmony, while demonstrating a holistic approach to health and well-being,” Portuguese Ambassador Alvaro Mendonca e Moura told the UNGA in a speech delivered on Kutesa’s behalf.

Introducing the resolution, Mukerji said it recognizes “that wider dissemination of yoga’s benefits would be beneficial for the health of the world population”. The resolution was adopted along with a package of measures dealing with international health and cooperation.

Mukerji quoted an explanation of yoga by B.K.S. Iyengar, one of its great modern propagators: “Yoga, an ancient but perfect science, deals with the evolution of humanity… Yoga means union – the union of body with consciousness and consciousness with the soul. Yoga cultivates the ways of maintaining a balanced attitude in day to day life and endows skill in the performance of one’s actions.”

On the relevance of yoga to the problems of climate change and environment, Mukerji cited Modi’s remarks on how the broader vision of yoga can have an impact. “We need to change our lifestyles,” he quoted from Modi’s September speech.

“Energy not consumed is the cleanest energy. We can achieve the same level of development, prosperity and well-being without necessarily going down the path of reckless consumption… By changing our lifestyle and creating consciousness, it can help us deal with climate change.”

Beyond the UN, the declaration of Yoga Day was welcomed by the 53,000-member Yoga Alliance.

Barbara Dobberthien, its chief operating officer, said: “The Yoga Alliance was created to spread the power of yoga, and International Yoga Day provides us with another very powerful platform from which to support our mission.”

Suhag Shukla, the Hindu American Foundation’s executive director, said: “In addition to gaining appreciation for one of Hinduism and India’s greatest civilisational contributions, our hope is that the International Day of Yoga will introduce people around the world to not only the wellness benefits of yoga, but its transformational power-its insistence on spiritual experience over dogma, its ability to allow individuals to understand our shared divinity with one another and nature, and its power for bringing about both inner and outer peace.”

The foundation has a “Take Back Yoga Project” to highlight the roots of goga in Hinduism.

“Yoga involves not only postural and breathing exercises, but is a holistic spiritual lifestyle which, broadly speaking, includes ethical practices and restraints, selfless action, devotion, scriptural study, focus, meditation, and withdrawal of the senses-all towards the goal of union with the Divine,” she said.