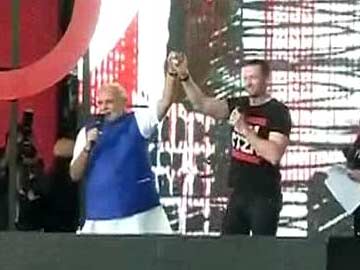 New York, Sep 28 (IANS) Who would have thought of Narenda Modi as a rock star? But Saturday evening, the Indian Prime Minister shared the stage with top music stars like JayZ, Beyonce, Carrie Underwood, Sting and Alicia Keys and himself received rockstar treatment from a crowd of more than 65,000 at New York’s landmark Central Park as he talked about down-to-earth subjects like sanitation, health and global peace.

This was a coup for him in image building: He was able to reach out directly to a liberal audience of mostly young people without the filter of a critical media and break the stereotypes made of him. In a major departure from his practice, he spoke to them in English and could connect to them on the festival’s theme of fighting poverty and seeking justice, by articulating his ideas on these topics.

This was the biggest audience that an Indian leader has got in the US, adding hundreds of thousands of TV and internet viewers to the more than 65,000 at the park, the soul of New York and its enchanting green lung in a skyscraper-dotted Manhattan.

A visitor from Delhi likened that to US President Barack Obama speaking at a concert in Ramlila Maidan in New Delhi or Lodhi Garden featuring Bollywood stars.

Other leaders who too beamed their messages at the assembled youths included UN Secretrary General Ban Ki-moon, Bangladesh Prime Minister Sheikh Hasina, World Bank president Jim Yong Kim, Norway Prime Minister Erna Solberg and Nepal Prime Minister Sushil Koirala but they were all dwarfed by Modi’s personality and the way he connected with the audience.

From the ramparts of the Red Fort in Delhi on Aug 15, India’s Independenc Day, where he first talked about it, Modi took his message of sanitation to Central Park, hailing people gathered there who are part of Global Citizen, an internet-based global network of people fighting poverty and lack of sanitation across the world among other pressing issues.

“How are you doing in New York?” Modi, dressed in an off-white, half-sleeve kurta with a striking cobalt blue jacket – Modi has been changing his dress appropriate to evcry event and occasion – greeted the crowd in English after the comperes of the show, Global Citizen Festival, announced the arrival of a person who changed the sanitation facilities of the Indian state of Gujarat from one of the worst to one of the best.

“Namaste,” he said, adding that he was greeting people who were watching the show on TVs, smartphones, tablets and laptops as well.

“I am truly delighted to be in an open front and not in a closed conference room.”

This was his opportunity to reach out to America’s mainstream – especially the young people and those of the liberal persuasion. He drew repeated applause from the crowd speaking about poverty eradication and the importance of sanitation to healthcare. He seemed to pause and attune his message to the crowd.

Modi said that the work today’s youth were doing on problems like sanitation and poverty would have deep impact in the times to come.

“In India, 800 million youth are joining hands to make drinking water and sanitaton available in the hands of everybody,” he said.

Modi said the youths in India could see that “you are joining hands” with them.

“God bless. May the force be with you,” the Indian prime minister, who is on a five-day official visit to the and delivered his maiden speech at the UN General Assembly Saturday, concluded.