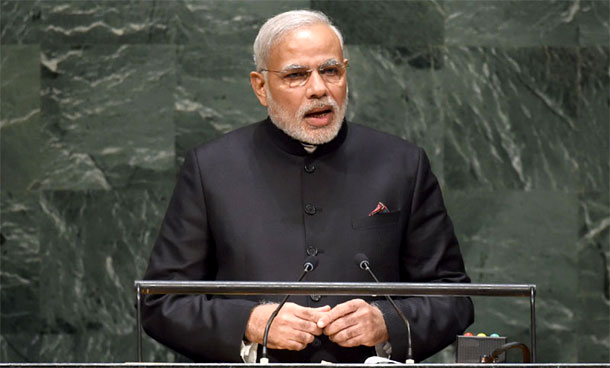 New York, Sep 28 (IANS) Chiding Pakistan for raking up Kashmir in the UN General Assembly, Prime Minister Narendra Modi said Saturday that the UN was not the forum for resolving bilateral issues and stressed his government’s prioritizing good ties with neighbors even as he pushed for reforms of the UN and touched upon issues challenging the world, including terrorism, poverty, hunger and climate change.

Modi, speaking in Hindi in his maiden address to the UN General Assembly, said: “I am prepared to engage in a serious bilateral dialogue with Pakistan in a peaceful atmosphere, without the shadow of terrorism, to promote our friendship and cooperation. However, Pakistan must also take its responsibility seriously to create an appropriate environment.”

In his 35-minute speech, Modi made a strong pitch for reform of the UN, and underlined the Indian philosophy of “vasudeva kutumbakam” or seeing the world as one family.

Referring to his government’s outreach to neighbors he said India “desires a peaceful and stable environment for its development”.

“A nation’s destiny is linked to its neighbourhood. That is why my government has placed the highest priority on advancing friendship and cooperation with our neighbours.”

He called for greater engagement between countries. “We must reform the United Nations, including the Security Council, and make it more democratic and participative,” he said in his address to the 69th session of the UN General Assembly.

“We need a genuine dialogue and engagement between countries. I say this from the conviction of the philosophical tradition that I come from. Our efforts must begin here — in the United Nations.”

He said the UN would be a 70-year-old organisation next year and it was time to “ask ourselves whether we should wait until we are 80 or 100”, to bring changes to the world body.

“Let us fulfill our promise to reform the United Nations Security Council by 2015. Let us fulfil our pledge on a post-2015 Development Agenda so that there is new hope and belief in us around the world. Let us make 2015 also a new watershed for a sustainable world. Let it be the beginning of a new journey together.”

Modi said that terrorism had spread far and wide and that there was hardly any country that has stayed untouched by it. In a tangential reference to Pakistan, Modi said some countries still allowed terrorism to grow on their “territory or use terrorism as instruments of their policy”.

He urged the international community to put aside their differences and mount a concerted international effort to combat terrorism and extremism.

“As a symbol of this effort, I urge you to adopt the Comprehensive Convention on International Terrorism,” he said. “We should ensure that there will be peace, stability and order in the outer space and cyber space. We should work together to ensure that all countries observe international rules and norms,” he added.

Modi did not directly name the Islamic State terror group that controls large swathes of territory in Iraq and Syria where it has declared an Islamic caliphate and which would be governed as per Islamist laws.

“We welcome efforts to combat terrorism’s resurgence in West Asia, which is affecting countries near and far. The effort should involve the support of all countries in the region,” he said, referring to the US-led airstrikes on IS targets in Iraq and Syria.

Referring to the splintering up of the world into smaller blocs instead of being interdependent, Modi said the world today “operates in various Gs with different numbers”.

“On the one side, we say that our destinies are inter-linked, on the other hand we still think in terms of zero sum game. If the other benefits, I stand to lose,” he said, reflecting on the current one up-manship thinking in the world.

In a philosophical note, he said: “It is easy to be cynical and say nothing will change but if we do that we run the risk of shirking our responsibilities and we put our collective future in danger.

“Let us bring ourselves in tune with the call of our times. First, let us work for genuine peace,” Modi said.

He also said the world must pursue a more stable and inclusive global development. He said the world should craft a “genuine international partnership” with better coordination of policy “so that our efforts become mutually supportive, not mutually damaging”.

“It also means that when we craft agreements on international trade, we accommodate each other’s concerns and interests.

He also proposed that the UN should adopt an International Yoga Day.

The Indian diaspora was gathered outside the UN in large numbers, holding placards greeting Modi and chanting his name.