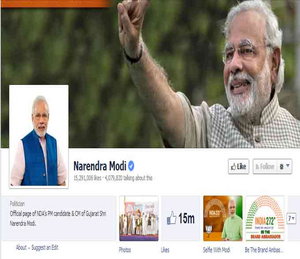 Washington, Oct 2 (IANS) Indian Prime Minister Narendra Modi has more Facebook fans in the US than most current members of Congress, governors and other political candidates, according to a media report.
Modi’s American Facebook base of 170,529 as of Wednesday is larger than all but 21 American elected officials and current candidates, the New York Times reported citing Socialbakers, a site that tracks social media accounts.
The influential US daily attributed it partly to effective use of social media in Modi’s high-profile election campaign and employing it as an important part of his communication strategy after coming to office.
While his popularity among people of Indian descent in the US was vividly displayed by the reception he got at a sold-out Madison Square Garden event Sunday, several American politicians in fact benefited from Modi’s presence in the US, the Times said.
Members of Congress who attended the Madison Square Garden event received sizable boosts on Twitter after posting pictures of themselves with the Indian leader with Tulsi Gabbard, first Hindu in the House, getting at least 767 new followers after the event.
Most of Modi’s social media followers come from India, which has the second largest number of Facebook users, the Times noted.
He also has at least 10,000 Facebook fans from 21 countries, including Pakistan, where he has 94,553 Facebook fans.
There are American politicians who have a bigger social media base. President Barack Obama, who has more Facebook fans outside the US (37.8 million) than inside it (15.1 million), tops the list, the Times said.