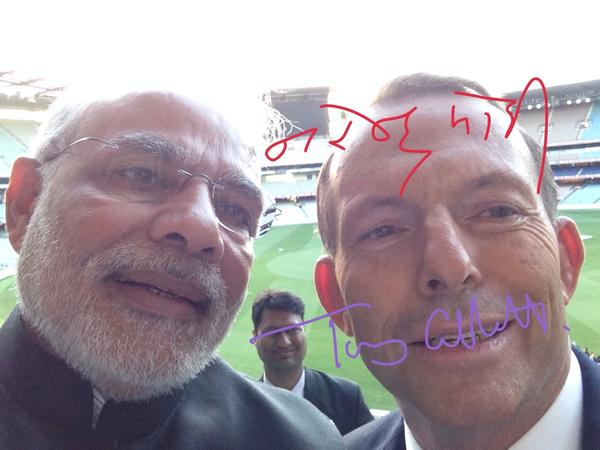 He and Abbott shook hands, smiling widely, and the Australian prime minister gave him a warm hug.

The two prime ministers then posed for an autographed selfie, smiling and chatting.

The selfie was posted on Modi’s twitter handle, with the words “With my friend @TonyAbbottMHR at the MCG.”

He also tweeted: “PM @TonyAbbottMHR came in September. He was the first guest since we formed the Government.”

“People asked me isn’t it too soon to visit Australia after @TonyAbbottMHR just visited. I said I can’t say no to my friend Tony,” went the tweet.

After the dinner, Modi left for Fiji, ending his five-day four-city visit to Australia.

He was in Brisbane for the G20, in Sydney where he addressed Indian expatriates, in Canberra where he addressed the Australian parliament and held bilateral talks with Abbott. He visited Melbourne to attend the reception at the MCG.