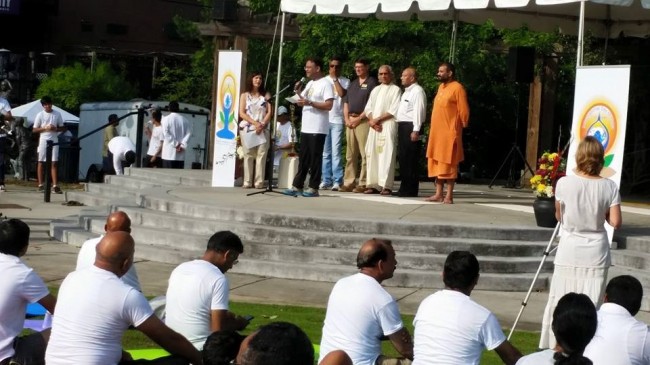 New Delhi, June 21 (IANS) It was an unprecedented demonstration of India’s soft power as tens of thousands across the world, besides millions in India, performed yoga on Sunday to mark the inaugural International Yoga Day (IYD). A record-breaking 37,000 people, led by Prime Minister Narendra Modi, took part in the main early morning event at Rajpath in the heart of New Delhi.

Yoga was performed at events across the world — from Atlanta and New York to Trinidad and Tobago, from the Maldives to Australia, from Tel Aviv to Moscow, from on board Indian naval ships to the high Siachen glacier, at schools and at innumerable residential localities — all to mark the IYD on June 21.

The mega event at Rajpath, the ceremonial boulevard and the surrounding green expanse that connects Rashtrapati Bhavan, the presidential palace on Raisina Hill, with the World War I memorial India Gate, was replicated across state capitals, cities, towns and rural areas in the country. Modi described the event as the start of a new era for training the human mind for mind-body balance, peace and harmony.

Modi, who himself did the asanas among the crowd of yoga performers at Rajpath, said yoga was not only an exercise to make the body flexible but a path for inner development.

“It marks a new era of training of human mind for peace and harmony,” said Modi, attired in a while full-sleeve loose white shirt and white lowers, with a scarf in the saffron, green and white colours of the Indian flag thrown around his neck.

Over 200 million people across India would mark the day at official events, AYUSH Minister Shripad Naik said. Events were held in the morning hours in 192 countries, organised by the Indian missions and yoga centres. As the sun rose on the globe, the yoga events began kicking off, with the eastern most countries sending in their pictures.

India is seeking to notch a few records with the mammoth event, closely monitored by officials of the Guinness World Records at Rajpath.

Foreign Secretary S. Jaishankar and Cabinet Secretary Ajit Seth were present but did not join. Senior officials of joint secretary rank and above from the Prime Minister’s Office and other ministries were present.

Remarking at the sea of people, Modi said: “Did anybody ever think that Rajpath can become Yogpath?”

Modi did all the 35 asanas listed in the Common Yoga Protocol performed on Sunday. A group of yoga experts did the yoga exercises on a stage, beamed to the crowd via around 25 large screens, with instructions in Hindi and English.

Modi is a keen yoga enthusiast on whose proposal the UN last year announced holding of IYD on June 21.

The one-and-a-half-hour event, which began at 6.45 a.m. after Modi’s arrival, ended at 8 a.m., and just escaped the sharp pre-monsoon showers that drenched the capital soon after.

As the event got over, the sky became overcast as strong gusts of wind shook the tree branches along the Rajpath boulevard. Droplets of rain fell — and in 20 minutes it poured.

A strong security arrangement was present around the Rajpath and only those with special invitee cards were allowed in. Groups of people who did not have entry passes did yoga at a nearby ground.

Over 1,400 women training to join Delhi Police did the yoga asanas as did senior citizens.

Muslims, some wearing the skull cap, took part with enthusiasm. There was an 11-year-old Mohd Aseem from a government school in Vivek Vihar who said he enjoyed doing yoga.

The US envoy said he found the yoga session “excellent”.

The envoy of Burkina Faso, Idriss Raoua Ouedraogo, who has been practising yoga for over 27 years and is a teacher, said he was delighted to have been at Rajpath.

Former Sri Lankan president Mahinda Rajapaksa hailed Modi. “As a practitioner of yoga, I commend PM @narendramodi for his efforts at the UN,” he tweeted.

Indian soldiers did yoga at the Siachen glacier, the world’s highest battlefield at 5,400 metres altitude, and in Ladakh and Kargil, besides at all major stations.

The Indian Navy, observing “Yoga across the Oceans”, had ships stationed in international waters, from the Mediterranean to the South China Sea, and the crew performed yoga.

Many Muslims turned out for doing yoga, despite the month of Ramzan having begun and many of them being on fast.

He said that while yoga may have originated in India, it draws energy from the millions who practice it around the world.

Doing yoga regularly helps to reduce greed, violence, cost of healthcare and conflicts within communities and between nations, he said.

The Art of Living said some 50 million people across 132 countries did yoga on Sunday with the spiritual group.