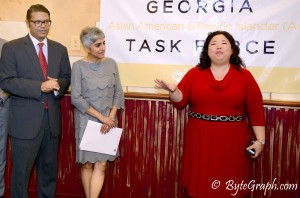 Farooq Mughal and Bonnie Youn with Kiran Ahuja (center), during her recent visit to Atlanta. Photo by Bytegraph.

The Georgia Asian American & Pacific Islander (AAPI) Task Force was recently organized with the goal of pursuing the creation of a new AAPI Commission for our state. The establishment of a new Commission would provide our communities with a historic opportunity to engage our elected officials, and address AAPI needs statewide.

The Barnes Commission, granted a small budget of $30,000, met quarterly with the Governor’s office and produced a written report with recommendations for improving access to state government regarding our AAPI communities. In its last iteration, the Perdue Commission had 18 members, and served as an advisory board between the Governor’s Office, other state agencies and the private sector as they related to AAPI affairs and initiatives. The Commission worked with community organizations, local governments, and private enterprises primarily in an economic advisory role to attract international business and create jobs while also helping local AAPI-owned businesses. The Commission’s consulting role provided valuable insight to promote AAPI policy initiatives on healthcare, economic opportunity and education.

Although the Commissions have now expired, Georgia’s AAPI communities have expanded exponentially, and make significant contributions to the progress of our state. According to U.S. Census data estimate, our numbers grew by 83% in the past 10 years and AAPIs now constitute 3.6% of Georgia’s population. Our state experienced the fifth fastest growth of AAPIs in the nation. However, we continue to face daunting challenges in achieving social, political and economic integration. For example, AAPIs have unique issues that require policy platform development on healthcare, school bullying, language services, education, and diversifying our representation in the state judiciary and political appointments. As our demographics increase, our issues have amplified. To address these pressing conditions requires fair representation, and fair access to state government services.

Policy makers should view Georgia’s AAPI communities as a huge asset—a majority of our communities operate minority-owned businesses that create jobs, build Georgia’s economy, and make our state attractive to international trade. A study from the Minority Business Development Agency (MBDA) analyzing the 2007 U.S. Census Survey of Business Owners revealed that there are more than 46,000 AAPI business owners in Georgia with gross receipts of $14 million annually. The MBDA analysis clearly showed that Asian-owned businesses translated to greater revenue, higher employment rates, and stronger consumer buying power for our state.

Over the years, AAPIs have made progress in Georgia. In 1998, the Honorable Alvin T. Wong, a trailblazer, was elected to the State Court of DeKalb County, the first AAPI to run for public office in metro Atlanta and the first elected judge in the entire Southeast. In 2004, former State Rep. Charlice Byrd was the first female State Representative of AAPI descent to be elected to the Georgia General Assembly, followed by State Rep. BJay Pak in 2010, the first Korean American to serve in our state legislature. In 2009, Alex Wan was elected as the first Chinese American and openly gay Atlanta City Council Member. Recently, former Fayette County State Court Judge Carla Wong McMillian was appointed by Governor Deal as the first AAPI to serve on the Georgia Court of Appeals.

To reflect that progress, the Georgia AAPI Task Force coordinated with the White House Initiative on AAPIs in March 2012 to host the immensely successful SE Regional Action AAPI Summit at Emory University, attended by over 500 delegates from throughout the Southeast. A year later, the Task Force followed this by organizing the 2013 Georgia AAPI Legislative Day this past February, gathering the largest number of AAPIs at the Georgia Capitol in history.

In campaigning for a new Commission, the Task Force’s vision is to see the legislative creation of a sustainable, permanent body dedicated to advocacy on behalf of AAPIs in Georgia. Ideally, the new Commission would conduct studies within Georgia’s AAPI communities, and prepare trusted recommendations to the Georgia General Assembly and the Governor on multiple issues, such as economic development, international business and investments, political appointments, education, language access, healthcare policy, and public safety. The Commission would also provide insight on how to improve access for AAPIs to state programs, and serve as a liaison between the AAPI communities and state agencies.

On June 21, 2013, the Task Force held a reception with former Governor Roy Barnes, members of the state legislature and the Atlanta City Council, to honor the legacy of Georgia’s past Asian American Commissions. All of the government officials vocally endorsed the creation of a new AAPI Commission. A week later, the Task Force hosted Kiran Ahuja, the Executive Director of the White House Initiative on AAPIs (WHIAAPI), who toured Gwinnett County, now 13% AAPI. Ahuja met with the County’s Commissioners and Mayors, and her keynote address spoke about Building Georgia’s Asian American Future. The event highlighted the potential that the WHIAAPI federal model could be followed on a state level.

The Task Force aspires to create a strong bipartisan environment of support from the state legislature and government leadership, to jumpstart the creation of a new Georgia AAPI Commission. It is imperative to reboot and re-ignite an initiative that our communities enjoyed over a decade ago. Now more than ever before, Georgia needs a sustainable AAPI Commission that is not subject to the variables of political appointment. We seek a Commission with a mandate to create an annual written report, to meet consistently with the Governor and state lawmakers, and to generate special insight into the needs of Asian Americans and Pacific Islanders in Georgia.

*Farooq Mughal and Bonnie Youn are members of the Georgia AAPI Task Force.

The audacity of Joe Biden