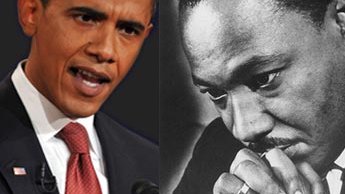 Washington, Aug 28 (IANS) As Washington geared up to re-enact Martin Luther King’s historic march inspired by Mahatma Gandhi, President Barack Obama said King would have been “amazed in many ways about the progress that we’ve made”.

But the US civil rights leader, who led the March on Washington for Jobs and Freedom Aug 28, 1963, and delivered his iconic “I have a dream” speech from the steps of the Lincoln Memorial, would not be satisfied, Obama said.

Obama, who gives the concluding speech at Wednesday’s event at the site of King’s address in 1963, made the comments in an interview with the “Tom Joyner Morning Show”, a nationally syndicated radio programme.

The president also joked that his address “won’t be as good” as King’s original 1,600-word address — arguably one of the most important speeches of the 20th century — that became a crucial moment in the struggle for civil rights in the US.

“Because when you are talking about Dr. King’s speech at the March on Washington, you’re talking about one of the maybe five greatest speeches in American history,” said Obama.

“And the words that he spoke at that particular moment, with so much at stake, and the way in which he captured the hopes and dreams of an entire generation I think is unmatched,” he said.

“I think that Dr. King would be amazed in many ways about the progress that we’ve made. I don’t think that he would look and say nothing has changed,” Obama said.

“He would say, the fact that we have equal rights before the law; the fact that the judicial system and the courts are accessible; and that African-Americans serve on juries. I think he would say it was a glorious thing,” he said.