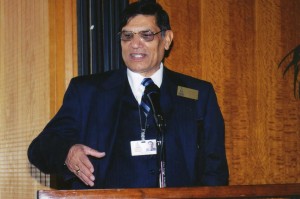 On March 19, 1948, a train full of Hindu and Sikh prisoners of Alibeg Prison (Pakistan) reached India.   I was 10 years old and one of the liberated prisoners on that train.  Following are excerpts from my book “Forgotten Atrocities: Memoirs of a Survivor of 1947 Partition of India”.  Hope those horrible scenes are not repeated again. 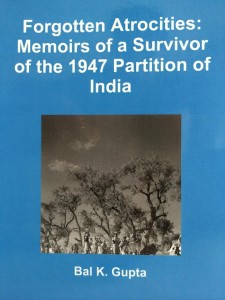 A similar prison of Muslim widows, children, and old men was set up in Kacchi Chhawni, Jammu (India). The Muslim prisoners in Jammu were treated well because the chief minister of Jammu and Kashmir, Sheikh Abdullah, was a liberal Muslim. By March 1948, the ICRC in Alibeg carried out the necessary negotiations and paperwork for the exchange of the Hindu prisoners of Alibeg with the Muslim prisoners of Jammu. The ICRC brought about sixty trucks and buses to the Alibeg prison and each truck or bus could accommodate twenty to thirty persons. It took the ICRC volunteers almost an entire day to count the prisoners and load them onto the trucks and buses. We all started lining up in the morning, and skipping lunch so as not to take any chances of missing the buses or trucks. 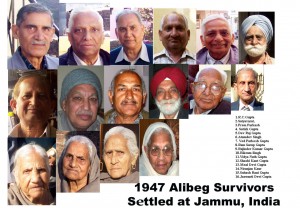 On March 18, 1948 late in the afternoon, under the banner of “Pakistan Red Cross,” the convoy of buses and trucks with about 1600 surviving Hindus and Sikhs, left the borders of POK, crossed the Jhelum, and entered Pakistan. By evening, the convoy reached Serai Alamgir, which was the nearest train station. The Pakistani army and police had provided guards on the railway station so that Muslims would not attack the Hindu prisoners. We got down from the buses and trucks and boarded the waiting train, which soon was overloaded with Hindu prisoners. To avoid confusion, ICRC personnel allotted each bogie strictly according to the list prepared in Alibeg. Cramped in the bogies (carriage or small train-cars), we were hungry and thirsty, and some of us had not eaten anything since morning. Each bogie had over one hundred passengers occupying all the seats and floor. There were no lights in the carriages and it was difficult to see the faces of other passengers. Later on, about one hundred and fifty women and children from Datial Camp also arrived and were accommodated in last two bogies. Amongst them were families of my friend Suresh Chander and Mrs. Krishna Mehta (later on an MP from J&K).

After midnight, some Muslims attacked the last two bogies of women and children of Datial Camp. They had known that these bogies had young women of Datial Camp. In the darkness, they tried to drag out some of these girls at the point of daggers and swords. However, those girls screamed loudly in the night, which woke up entire train. They were crying for help and the railway guards ran to their rescue and foiled their abduction from the Muslims. After this incident, everybody in the dark train was scared and nobody could sleep. We all were praying and afraid of what could happen next.

The next morning, at 5:00 A.M., the train left Serai Alamagir station. The ICRC officers and armed Pakistani guards accompanied the train to protect the Hindu prisoners. The same day, at about noontime, the train reached Lahore, the largest city in the Pakistani province of Punjab. In 1947, Lahore was one of the most notorious stations, where Pakistani Muslims had slaughtered trains full of Hindu and Sikhs fleeing to India in retribution for trains full of slaughtered Muslims coming from India. Somehow, on this morning, the word had leaked out that a train of Hindus was passing through Lahore on its way to India. Although the Pakistani army and police fully guarded the Lahore station, we could see hordes of angry looking Muslims outside the fence of the railway station.

Our train waited in Lahore for almost the rest of the day for official procedures and clearances from the authorities. The Pakistani guards would not allow us to get off the train to drink water because it would have caused a riot at the station. The Pakistani authorities had not arranged for any food or drinking water, and since many of us had not eaten since the day or night before, we were starving. It was almost springtime and the overcrowding of the train made the conditions more miserable. The hope to reach India soon was the only thing keeping our spirits, and ourselves, alive.

On the evening of March 19, 1948, the Pakistani railway authorities allowed the train to move out of Lahore Station. At about 5:00 P.M., it crossed the India-Pakistan border at Wagah and reached the Atari Station (Indian Punjab). Ours was the last train of Hinduand Sikh refugees from Pakistan. Most of us got down onto the Atari platform and kissed the promised land of India. We were no longer prisoners of Pakistan but rather refugees in free India. Kind Sikh farmers who inhabited (and still inhabit) Atari Station had heard about the fate of the last train of Hindus coming from Pakistan and had prepared halwa (porridge) for all the refugees. The Sikhs of Atari had also arranged plenty of water for drinking and washing. I almost took a mini-bath under a water hydrant that was primarily used to fill the steam engine of the train. Some of these Sikh men even distributed some cash to the refugees. I received some cash with which I was able to buy something to eat from the vendors at the Atari station. The train stopped there for two to three hours and then proceeded to Amritsar.

Dear Mr Gupta,
Greetings.
I am an Army veteran from Naushera. Need to connect with you. Kindly revert (+91-9419235090 or ajaykrraina@gmail.com).
Thanks and regards