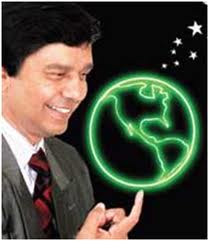 Chicago, Dec 2 (IANS) Denver-based Manick Sorcar has been honored for introducing the younger generation in India and viewers in the West to Indian heritage through laser displays.

Sorcar was given a Special Achievement Award for Cultural Enlightenment, at the International Laser Display Association (ILDA) conference held in Aalen, Baden-Württemberg, Germany.

The citation stated that Sorcar was awarded “for exceptional merit in using laser display to celebrate India’s heritage, and to prepare the next generation by introducing a course on laser art and animation and establishing the Manick Sorcar Laser Animation Laboratory at Jadavpur University”.

Sorcar said he was doubly pleased with the award because it was an acknowledgement of his work to propagate Indian heritage through laser displays.

“Laser has been the painting brush of the 21st century with which spectacular, mind boggling atmospherics can be made. But I feel, laser can be more than that. It can also be the magic-pen or the media with which a message can be passed, a theme can be carried, a story can be told. Together, it can not only be a feast for the eyes, it can connect with people to illuminate a soul,” Sorcar told IANS.

“My laser shows are an attempt at that goal. Produced in English and based on stories or events from India, each is intended to be a cultural-bridge between East and West where the viewers are taken to the other side of the globe and introduced to the Indian culture in a grass-root level for a better understanding, harmony and world peace,” he added

In 2006, when Sorcar took his laser show to India, it was displayed at Kolkata’s Nicco Park, an amusement park. It ran for one month completing 78 shows.

“What touched my heart was to see how dozens of lighting enthusiasts, mostly engineering students, come backstage after each show to see how the strong beam of light was manipulated to be a harmless painting brush to create graphics and atmospherics. When I briefly explained the technique, you could see the sparkle in their eyes and hear their excited discussions on building a story board for their first laser project. But it is not that easy. They must have a thorough knowledge of the laser technology and safety issues before doing anything – and it must be taught systematically, with a formal educational course and practical training,” he said.

Sorcar approached Jadavpur University to set up the School of Illumination, Science, Engineering and Design. The ‘Laser Lighting for Art, Animation and Entertainment’ course was accepted as a special application of lighting towards an illumination engineering degree. The lab and the classes were formally opened two years ago and Sorcar is a visiting lecturer.

Sorcar’s latest production “Swamiji”, a laser documentary on Swami Vivekananda, received an enthusiastic reception in India during its four-month tour across the country last year, where it was also nationally telecast. The laser show is currently on a tour across the USA as a fund-raiser for the SEWA International USA, a non-profit humanitarian organization.

In 2012, Sorcar, who prefers to call himself a ‘laserist’, retired from Sorcar Engineering, a Denver-based electrical engineering and lighting firm to devote his energy full time to touring laser shows with his production team. Sorcar credits his passion for narrating stories through laser displays to his father, the legendary magician P C Sorcar, whom he had assisted on stage, as a child.