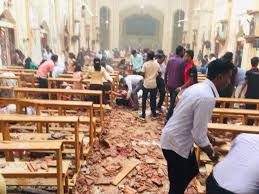 Colombo, April 24 (IANS) Two sons of millionaire businessman and spice trader Mohammed Yusuf Ibrahim were among the suicide bombers who carried out the Easter Sunday attacks in Sri Lanka which killed at least 359 and injured hundreds, media reports said.

The brothers — Ilham Ibrahim and Inshaf — blew themselves up as guests queued for breakfast at the Shangri-La and Cinnamon Grand hotels in the capital on Sunday.

According to an investigation officer cited by the Daily Mail, the bombers were in their late twenties and had operated their own “family cell”.

The two were also key members of a local Islamist outfit — National Thowheed Jamath (NTJ) — blamed by the Sri Lankan government for the attacks, he said.

The Sri Lankan police have arrested 58 suspects from different areas of the island country.

The Daily Mail reported that one brother gave false identity details when he checked into the hotel but the other gave the real address which led police commandos to their family home in a commercial area of Colombo.

When the Special Task Force raided the house, Ilham Ibrahim’s wife Fatima set off a bomb, killing herself and her two children, the police said.

Three police commandos were also killed in the blast. Several extended family members were among those in detention, the daily said.

“It was a single terror cell operated by one family. They had the cash and the motivation. They operated the cell and it is believed they influenced their extended family,” the investigation officer was quoted as saying.

“What we have gathered so far is that they had indicated to their close family what they were going to do. It looks like they were inspired by foreign terrorist groups, but to what extent they had direct links is still unclear,” a senior police officer said.

The brothers had been involved in their father’s lucrative Colombo spice export business, investigators said, adding that a focus of the inquiry will be to find out whether there was a foreign influence in their radicalization and how the children of such a wealthy family had become involved.

The Islamic State on Tuesday claimed responsibility for the suicide attacks, but the government has blamed the NTJ.

Three luxury hotels — the Kingsbury, the Shangri La, and the Cinnamon Grand — were targeted apart from three churches in three Sri Lankan cities besides two other locations in Colombo on Sunday.

Investigators say that the bombers had planned another attack on a fourth hotel, but they either failed to detonate their device or decided against doing so.

“What we have seen from the CCTV footage is that all the suicide bombers were carrying very heavy backpacks. These appear to be crude devices made locally,” an official said.

According to investigators, the whereabouts of the NTJ leader, Zahran Hashmi, were unknown. He was earlier linked to the vandalizing of Buddha statues on December 26 at the central town of Mawanella.

The local Muslim community had been complaining to authorities about Hashmi since 2017.