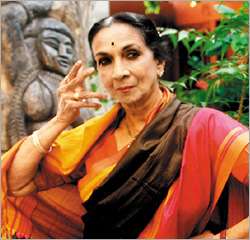 Ahmedabad, Jan 22 (IANS) Bharatnatyam exponent Mrinalini Sarabhai’s daughter Mallika has criticized Prime Minister Narendra Modi for not paying homage to her mother who died on Thursday, even as President Pranab Mukherjee said “her tireless efforts to spread Indian classical dance around the world will be always remembered”.

Mallika Sarabhai took to Facebook to ask why Modi, who belongs to Gujarat, had not bothered to condole the death of her 97-year-old mother.

“My dear prime minister. You hate my politics and I hate yours, that has nothing to do with what Mrinalini Sarabhai did to promote the culture of this country to the world over 60 years. She blazed a trailer for our culture in the world,” Mallika Sarabhai said.

“That her death sees no word from you shows your mentality. However much you hate me, as our prime minister it behove you to recognize her contribution. You have not. Shame on you.”

As an activist, Mallika Sarabhai continuously attacked the then Gujarat chief minister Modi for the 2002 communal riots in the state.

Mrinalini Sarabhai was a Padma Bhushan awardee. She founded Darpana Academy of Performing Arts, an institute for imparting training in dance, drama, music and puppetry.

As a tribute to the illustrious danseuse, Mukherjee said the void created by her demise “will be difficult to fill”.

“Demise of Mrinalini Sarabhai leaves a void in the world of creativity and performing arts which will be difficult to fill,” he tweeted.

She “believed that the power of dance, music, arts and literature must be experienced by the common man… Her tireless efforts to spread Indian classical dance around the world will be always remembered”, Mukherjee said.

Airlift: A salute to an unsung hero