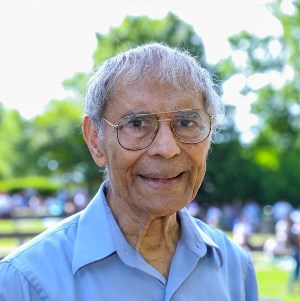 Atlanta, GA, October 10, 2019: At the Hindu Temple of Atlanta’s Volunteer Appreciation Day on September 15, 2019, several volunteers were recognized and some high school students received scholarships; the primary person honored was Atlanta’s veteran reporter Mahadev Desai, for his years of reporting in Atlanta and especially for his yeoman’s service to HTA. He was garlanded, felicitated with a shawl, and presented with a plaque and check.

​The blue plaque reads, “The Hindu Temple of Atlanta is proud to honor Sri Mahadev Desai for excellence in journalism & in appreciation of your long time dedication & commitment to promote HTA in the media.”

The honoree read his written thanks, graciously acknowledging his colleagues and supporters, and the others being recognized, and complimenting the Temple on its hospitality, its pool of talent, and its many activities for keeping alive the Hindu heritage in our adopted land.

He spoke with humor as well as seriousness of the many changes he has seen over his years of reporting, and noted that “it takes time, toil, tenacity, honesty, passion, and being impartial fair, objective, informative, and engaging to win the trust of the readers.”

All of these qualities have been amply demonstrated in Mahadev’s many informative reports, which have enriched the pages and later the websites of India Tribune, Khabar, NRI Pulse, Atlanta Dunia, and other publications for over 20 years. As well as covering community events such as dance productions, health fairs, cultural festivals, and religious events with his extensive knowledge of Indian songs and dances and Hindu religious customs, he has enjoyed writing profiles of community members, literary reviews, movie and play reviews, and his own short stories and humor pieces.

His international background (having lived and/or studied in Tanzania, Kenya, India, England, and the USA), his sporting prowess (in cricket, table tennis, and various other sports), his professional expertise (in accounting, taxation, teaching, and educational writing), his natural qualities of curiosity (being an avid reader and a sociable and empathetic person), as well as his positive energy have all contributed to his success in his many endeavors, not the least being his current career as a journalist. Atlanta is fortunate to have him among us.

For detailed report, visit link on the Khabar Magazine Website: