The celebration of Maha Sivaratri started at the break of dawn on March 9 and continued all through the night. Devotees observed fasting and spend the day and night engrossed in worship of Lord Siva. The celebrations began with an early waking up prayer (Suprabhatam) to Lord Shiva at the temple sanctorum in the early hours on March 9, followed by anugna, sankalpam, Maha Ganapati Puja and punyahavachanam in true traditional style. The temple’s resident priests, Srinivasa Sarma Adarasupally, Pavan Kumar Kristapati, Narasimha Murty Challa, Siva Naga Kumar Dusi performed with grandness Sahasra Lingarchana at 6 AM, Sri Rudra Homam at 11 AM, Ekadasa Rudrabhishekam at 12 PM, Siva Sahasranama Puja at 3 PM, Mahanyasam at 4 PM, First Yaama (prahara) abhishekam at 5 PM, Second Yaama (prahara) abhishekam at 7 PM, Siva Parvati Kalyanamu at 9.30 PM, Lingodbhava Kanya Paasupatha abhishekam at midnight 12 AM (March 10), fourth Yaama (prahara) abhishekam at 3.30 AM (March 10) and devotees performed samoohika Rudra Abhishekam on March 10 at 11 AM.

It is believed that this year’s special Kanya Paasupatha abhishekam, help the girls to get good husbands who  are waiting for their marriages and live happier married life   by the grace of Lord Siva. This will bring a new life to them. The temple priest Pavan Kumar reminded devotees that on every Maha Sivaratri, the temple performs special abhishekam at midnight called Lingodbhava kaalam abhishekam.

The temple has also made elaborate arrangements to enable devotees to offer milk to Shiva Linga throughout the day. Long lines of devotees patiently waited for their turn to offer milk to Siva Linga. There was special Puja, abhishekam, alankarams, arati, etc., on all four praharas (quarters) of the night. The temple resonated with all these rituals. The day’s program on March 09 concluded on early hours of March 10 with the customary mantra Pushpam, Mangala arati and distribution of Maha Prasadam to the assembled devotees.

While addressing the gathering after midnight, Mr. Narender Reddy, HTA President said, “It is humbling to see thousands of devotees arriving since morning to seek the blessings of Lord Shiva and Parvathavardhani. I’m so happy to see more than 400 devotees at the temple even at 2.00AM.  The celebration wouldn’t have been so successful if not for the hard work of so many volunteer priests, our expert Priests and scores of volunteers. In fact our biggest strength at HTA is our volunteer force who are ready to serve at any day and night”.  Reddy thanked Mr. Subbiah Emani, Chair, Puja Committee for his dedication and commitment to make Maha Sivaratri festival the most successful celebration. 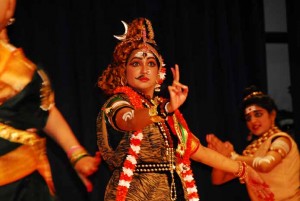 Sasikala Penumarthy as Ardha Nareeswara in a dance drama in Kuchipudi style.

It was unprecedented success of Sivaratri Festival in Hindu temple of Atlanta, Riverdale with more than 5,000 devotees attending over the weekend. Food Committee Chairperson, Seshu Sama and her team of volunteers made commendable arrangements  to serve devotees with delicious food throughout the day and night.  The cultural programs depicting Lord Siva story were excellent with performances of local classical dancers, Sasikala Penumarthi, her students and students of Revathi Komanduri, Mrs. Vishwanadhan, Jyothi Chintalapudi and Bhavini Rajan under the Chairmanship of Veena Venkataraman.

Global Mall: It was a beautiful evening of Sunday, March 10. The Ashiana banquet hall of Global Mall, Norcross was fully packed with almost 250 families clad in colorful traditional Indian clothes. They had gathered there to perform Maha Rudrabhishekh Puja on the auspicious occasion of Maha Sivaratri organized by Shiv Mandir of Atlanta, Global Mall, Norcross GA.

Two-hundred-fifty asanas were placed in rows on the floor for the devotees to sit and perform the Puja. Devotees were provided all essential Puja samagree, ghee, Sivaling, Panchamrit etc. In the front-middle of the hall, a decorated stage was set up where the Mandir priests Pt Gyan Prakash Upadhyay ji and Pt Madhav Kafley ji were sitting with the Mukhya yajmaans and guiding all the devotees to perform the Puja.

The Puja began at 5.30 PM with the Pranayam and sacred chanting of “Om”. It was so encouraging to see the families, with kids, parents and in some cases Grand Parents performing the Puja together. Pranayam was followed by a devotional Bhajans. The Puja was performed strictly as per Vedic rituals with Swasti vachan, Ganesh Vandana, sankalp, dhyaan, avaahan, solah upchaar Puja, Vedic Rudrabhishekh and 108 naam archana and Aarti followed by Maha Prasad. The Puja lasted for about two hours.  While the group Maha Rudrabhishekh Puja was being held on the ground floor, on the first floor, scores of devotees stood in queue, waiting to offer milk Abhishekam to Siva Lingam.  Over 5000 devotees offered milk Abhishekam. Later, Prahara Puja was conducted from 10 PM till mid night in the Mandir.

Sadhana Mandir:  Maha Sivaratri was celebrated with the usual fervor and devotion by the devotees of Sadhana Mandir in the Impact Conference Center within Global Mall in Norcross, Georgia. Acharya Ved Prakash Joshi, the temple priest led more than 250 devotees to a series of steps of the Puja that lasted almost 3 hours. The Puja was followed by a delicious Maha Prasad enjoyed by about 500 participants. The same Puja was repeated by Joshi ji in the temple from 9:00 pm-12:00 midnight for the benefit of those who were unable to participate in the afternoon.

Joshi ji started with Sri Ganapati (Ganesh) Puja, Siva Parivar Puja, Siva Puja, complete Rudrakshabhishek, Ang Puja, Shivastrotam and 108 names of Lord Shiva. The devotees watched him and followed his instructions at their own platforms. The formal Puja culminated with some Bhajans and Aarti of Lord Shiva.