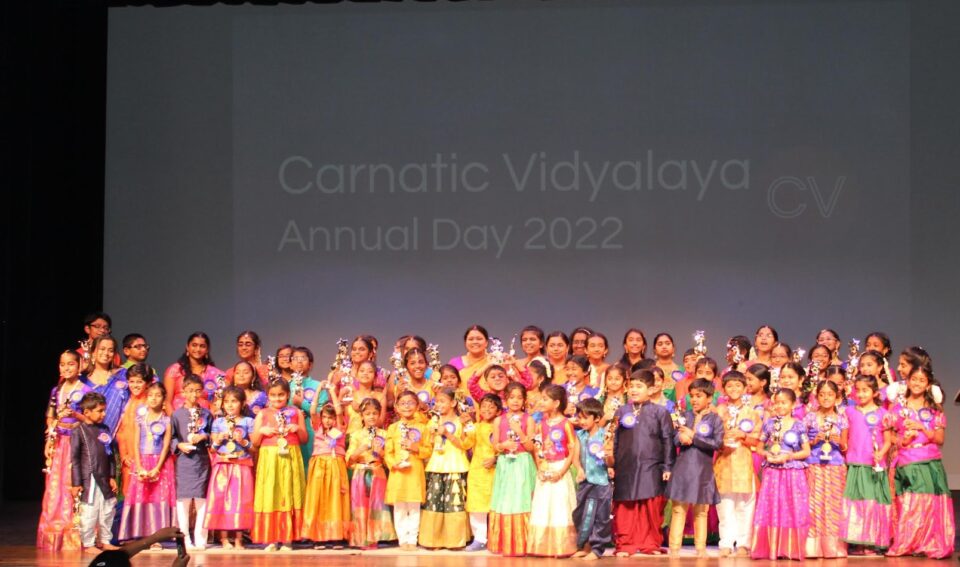 Atlanta, GA, October 21, 2022: Carnatic Vidyalaya, the premier school of Indian music for children of all ages celebrated its fifth Annual Day on Sunday, October 9th, 2022. The event was held at the Sylvia Beard Theater in Buford Community Center, Buford. The program included participation from all the students of the school in many different events.

The annual day event showcases the talent of students of Carnatic Vidyalaya, and this year’s event was another opportunity for the students to perform on stage. The students rendered great compositions of Sri Thyagarajar, Annamacharya, Muthuswamy Dikshitar, Purandaradasar, Rajagopalachari, Papanasam Sivan,and Mysore Vasudevachar. Also included were Shankarabharanam, Navaragamalika Varnams, Swarajathis, followed by many Geethams, and bhajans by younger participants. The students finally concluded with Shri Hanuman Chalisa. It was wonderful to see all the kids perform with remarkable group coordination, along with a perfect sense of thalam and raagam in alignment with the shruthi. The audience were treated to a delightful musical evening.

Carnatic Vidyalaya caters to small children, and it was a great sight to watch kids as young as 4 and 5 dressed in colorful traditional clothes, performing the songs and slokas with dedication.

Carnatic Vidyalaya established in 2014, firmly believes in encouraging students to learn our core culture. Based in Alpharetta, GA, Carnatic Vidyalaya strives to keep cultural ties intact among the young children living in the northern part of Atlanta. Having exposure to traditional music at a very early age helps preserve the bond with our culture. As a token of appreciation each participant was awarded a trophy by the founder and teacher of the school, Viji Murali.