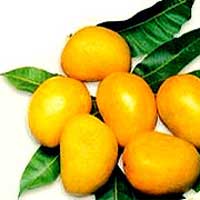 Around this season every year, friends and relatives, turn up at our house in South Delhi with mangoes wrapped in newspapers, gunny bags, even discarded bed sheets.

There are problem with this ritual. Good mangoes have to be separated from the bad. There are subtleties involved in this separation – over ripe and stale. The seasoned mango carrier takes care not to travel with ripe mangoes. They will get pulpy in passage. The untrained will make just this mistake: arrive with pulp, so smelly as to turn you off mangoes for a few seasons.

It is relatively simple to differentiate good mangoes from bad. What requires expertise of a high order is to establish a hierarchy of flavors from excellent to the barely tolerable within each genre of mangoes: Langra, Chausa, Dussehri, Malihabadi Safeda. And, if you cast your net nationwide, Malda from Bengal and Hemayat and Benishan from Hyderabad – and scores of others.

Our Avadh chauvinism is bruised when we are reminded that the finest langras, the king of mangoes with a tang in its sweetness, comes from areas east of Avadh – Varanasi, for instance. Langra means lame and it is just possible that this most delicious of fruits was grafted or developed by a mango enthusiast who did not have a leg or who limped like Timur who was called Timur the lame and whose cruelty figures in the poetry of Majaz in Lucknow and much more elaborately in Christopher Marlowe’s classic, Tamburlaine.

This year mango trafficking from our catchment area of Avadh has been hectic because there have been many more visitors to see mother who, at 97, is trying to conquer Esophageal malignancy with radiation therapy.

Last week my sister turned up from our village, Mustafabad, in Rae Bareli, with a ritual bagful of the mandatory mangoes. My mother was pleased. Even though she cannot swallow, she did hold a mango in both her hands, smelt it like a wine expert, and lay back having approved of the quality.

I was a little astonished at what I saw. It was all make belief. At least that is what it seemed to me.

This is what I thought was make-belief.

During our early schooldays, which is a long time ago, summer holidays were mango-time in Mustafabad. Our adorable grandfather, Abbajan, who, after graduating from Aligarh, had settled in the ample family house as something of an anchor when all else was lost beginning from his grandfather’s days, slowly, in installments, since 1857.

In anticipation of our arrival, some twenty or thirty cousins from Lucknow, Kanpur, Allahabad, Fatehpur, Pratapgarh, Rae Bareli, Kara, Patti, Abbajan would arrange for raw mangoes of varying lineage to be piled up in the four corners of a godown meant for foodgrain. A water proof sheet was placed on each pile which was then plastered with a thick paste of mud and water. This was called “paal”, a method of ripening mangoes.

It is a quaint coincidence that Ambassador of Tajikistan, Saidov Saidbeg was recently in the vicinity of my village which prompted him to write a verse on mango, in Persian.

Abbajan must have had a mystical link with India’s first prime minster. No one, not even Abbajan’s peers could address Nehru as anything but “Pandit Nehru”. Abbajan died on the same day as Nehru: May 27, 1964.

By this time the frequency of mango summers in Mustafabad had dwindled to almost nil not the least because of a sad realization. Abbajan had kept up an illusion that mangoes for our holidays came from groves in so and so village, all part of the property under his supervision. In fact most groves had been sold particularly after Zamindari abolition in 1955. He would lease trees for our holidays from groves already sold.

That is why the ritual gift of mangoes my sister brought from Mustafabad surprised me. Yes, beyond the pond outside our house, in a small patch of land stretching upto the railway tracks, there was one tree with an exquisite mango called Kalua. But over the years Kalua had withered away and the wood from it had been sold.

So, where did my sister’s gift come from? After all, my mother did feel the mango with some tenderness.

Despite rampaging urbanization, commercialization, dehumanizing pursuit of wealth, the rural countryside retains some of its lyric, its idyllic romance of which the mango is a part.

This will remain the most popular “bandish” or composition whenever raga Bageshwari is sung. Indian textile, from Kashmir to Kanyakumari, will always be adorned by the motif of the mango which, resembling the seed of so many other fruit, symbolizes fertility and regeneration. It was this eternal reality that my mother had seized upon. Right behind the Kalua tree, she had quietly planted a sapling of langra, which has now begun to yield a sufficient crop to enable my sister to turn up with a bagful of langras.

Acres upon acres of wheat and maize make for a bright foreground against which the dark, green mango groves bring the sort of relief that monsoon clouds bring. This is the scene from my village right upto Allahabad which falls outside the cultural boundaries of Avadh but is, nevertheless, good for mangoes.

When Akbar Allahabadi sent a box of choice langras to Allama Iqbal in Lahore, Iqbal sent him a couplet by way of receipt:

“Asar hai teri aijaz e masihaee ka ae Akbar
Allahaabad se Langra chale Lahore tak pahunche”
(Akbar, this is the miracle of your healing powers – like those of Jesus. Langra – the lame – traveled from Allahabad and has reached Lahore!)

Give the velvet touch to your nails