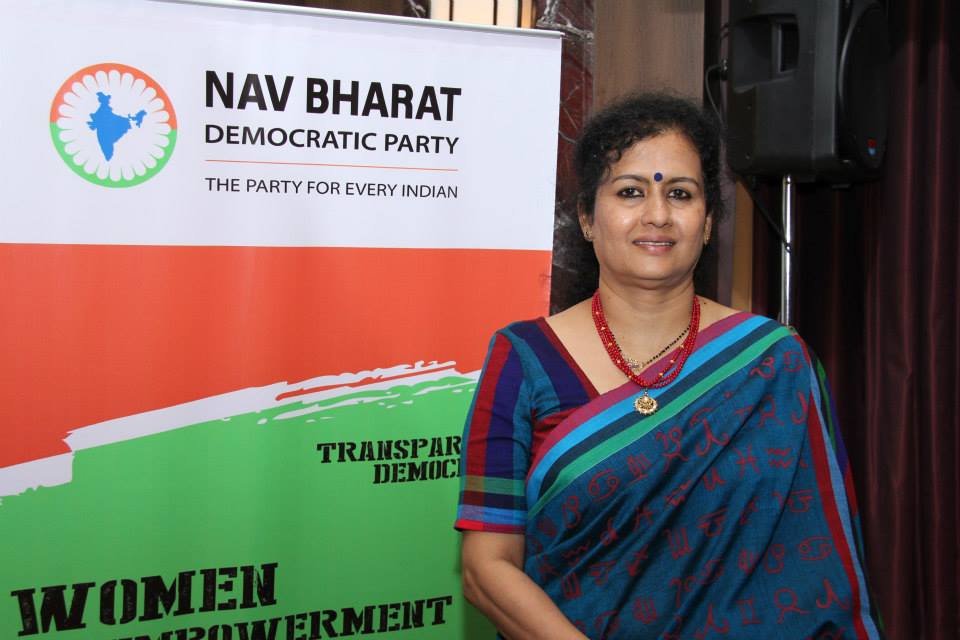 Atlanta, GA: Well-known activist and multiple award winning journalist, Vinita Deshmukh, is Nav Bharat Democratic party’s candidate for Pune’s Lok Sabha constituency. The party boasts of a repertoire of well known IT professionals who are aiming to bring back politics to the masses, engage with youth and speak for the underprivileged.

Deshmukh a well known face both in Pune and the media circles, juggles various roles including one as a doting grandmother, thereby endearing her to the common (wo)man!

She has had a 20-year-long career in several senior positions, including as an editor with the Indian Express followed by a stint with the Prabhat Group where she was the editor for the tabloid Intelligent Pune. She is currently consulting editor with MoneyLife, an Internet Financial Daily. Deshmukh has also co authored the best seller, non-fiction book “To the Last Bullet” with Vinita Kamte based on 26/11.

Vinita Deshmukh underplays her gender at a time when the question of women’s public presence is a national debate following widely reported cases of assault and harassment.  Never the one to mince words, she displays confidence in her work and ability instead to justify and support her nomination as a candidate.

Deshmukh recently took the time to passionately hold forth her political views exclusively for NRI Pulse.

On taking a plunge to the other side: from journalism to politics

Vinita Deshmukh has been at the fore of reporting events that have been socially and politically crucial and relevant.

“My public outreach includes campaigns which directly affect people, like the state of roads on national highways, the ration card issue, the passport issue, the water cut for the city despite the dams being full due to good rains and so on.  For these, I hold agitations, use the RTI Act to get information and interact with government officials to take issues to their logical end. The objective of my political campaign is to reach out to voters through genuine work and not through a mere glossy manifesto of false promises for the next five years,” she says.

She insists that because of this work oriented approach, the media sees her as continuing her crusade rather than sidestep issues. She adds that the desire for good governance without corruption motivated her to enter politics.

On her candidature for the Nav Bharat Democratic Party

Vinita Deshmukh maintains that her work extends beyond her writing in that pursuing a story has lead to a dialogue with authorities which then leads to generating an awareness and persuading the readers to engage in a movement. Sometimes this results in her own involvement in the form of agitations.  A few examples where Deshmukh’s writing and subsequent activism led to positive outcomes were the then President Prathiba Patil’s retirement bungalow which she was later forced to return, Dow Chemicals illegal land acquisition where the 100 acre plot was returned and the streamlining of the passport office.

“While taking up issues, I have seen from the ring side, the nexus between political parties and between political leaders and the bureaucracy. Both often have self and vested interests and do not care for the common man from whom funds come to them through taxes. Hence, the anger against the present political system and government malfunction was always at the back of my mind,” she says.

However, even then, Deshmukh never imagined she would enter politics. “When the Nav Bharat Democratic Party approached me early this March with the proposal to stand from Pune for Lok Sabha elections, I agreed because this new generation party’s philosophy and objectives blended with mine – that of good governance and going beyond any caste, creed or religion to achieve that goal.”

Deshmukh states that she is not the party’s chosen candidate because of her gender rather it is because of the party’s faith and her capability. Having said that, she admits that there is considerable interest and respect surrounding her candidature owing to her journalist and activist background. She is in the fray after 1951when Indira Maydeo from the Indian National Congress won Poona South as the first woman member. Vinita Deshmukh agrees that her confidence stems from the idea that a woman involves herself wholeheartedly into the task at hand. This and the fact that she won the prestigious The Statesman rural reporting award two times, may bring her the support of women’s organizations who work at the grassroot levels. Vinita Deshmukh says confidently that it is the male candidate who faces the challenge.

On being able to reach out to every Indian

The success of the aam aadmi party in the year end Delhi Assembly Elections has put the focus on a new wave of political participation that does not evoke lineage claims or age old ideologies. Although a few have succeeded with a thumping majority (Shantala Damale, nominee for Loksatta Party, whose interview was featured in NRI Pulse , polled an amazing 9,071 votes even though the party did not win a single Assembly in Karnataka), the current shift even with the status quo indicates a mood for change in a big way. But such party nominees and workers largely comprise an educated and professional elite. A large section of the voting population is not encapsulated in this minority. While there is no formula to guarantee a total outreach, Deshmukh is confident that the party’s clean image will enable a participative campaign where booth level membership at every booth would ensure a connection to the voters. Besides she believes that events and campaigns would also aid such an outreach program.

On supporting the concerns of the NRI community

Deshmukh’s activism has aided and addressed issues that are of major concern to many NRIs. Although she thinks the NRI community is saturated with support to Narendra Modi and the Aam Aadmi Party, she believes that an active virtual network among the NRIs as well as contributions to her campaigning would spell success for a new entrant that is seeking to bring about nothing but positive change.

“It would help if NRIs spread my work through email groups and share my activities which I post on Facebook and Twitter. I would also welcome small donations to cover the costs of my political campaigning,” she says.