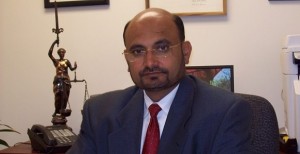 Washington, Jan 20 (IANS) Rupen R. Shah, who is currently the Chief Deputy of Augusta County Commonwealth in Virginia, has become the first Indian American judge to be elected the southeastern US state.

Shah is a resident of Staunton city and his six-year term will commence on February 1, according to a press release from the local General Assembly delegation announcing his confirmation on Thursday.

He was recognised by the State Bar as a local leader of the year 2009 and also served as president of the Augusta County Bar Association during 2008-2009.

The Indian American also has extensive experience in teaching law.

“The bottom line is he is an excellent choice,” Martin said. “I will miss him both personally and professionally. Our office’s great loss is the judiciary’s gain.”

Shah has worked as a prosecutor in Augusta County for more than 20 years, Martin said.

[…] Shah has worked as a prosecutor in Augusta County for more than 20 years, Martin said. Editor’s Note: This post was originally published on NRI Pulse Citation Source […]