Swati Dandekar (2nd from left) with members of the Atlanta media, and Global Mall owner Shiv Aggarwal. Photos by Photography by Vinod.

Atlanta, GA: A fundraiser was held for Swati Dandekar, Democratic candidate for US Congress from Iowa, 1st Congressional District, by her supporters at the Sugarloaf Country Club in Atlanta recently. A day before the fundraiser, Dandekar met members of the Atlanta Indian media for a conversation at the Global Mall.

Now, she is amongst 10 Indian-Americans running for a seat in the US Congress in 2014. She is up against four others in the largely Democratic Iowa 1st District primary race. If she wins, she will be the first Indian-American woman and the first woman from Iowa to make it to the US Congress. Primary elections are on June 3, 2014.

At the press meet, Dandekar said she was humbled and overwhelmed with the support of the Indian-American community in Georgia and across the US.

“I look at all of you as my extended family- as my brothers and sisters, and nieces and nephews,” she said, adding that recently, a young supporter had expressed happiness at having “an aunty” run for the Congress. 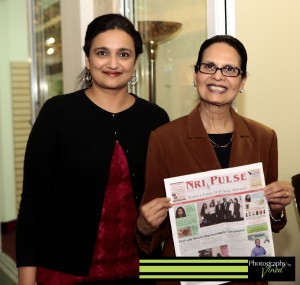 “I know I will work tirelessly for what is best for Iowa and also for Indian-Americans because that is my heritage and culture. I will make all of you very proud,” she said.

The former state legislator said she would work hard for India-US relations, as she did when she was in the Iowa state legislature. “The first thing I did when I was elected (to the legislature) was to take (then) Governor Tom Vilsack to India for the first time. We started a great friendship between Iowa and India.” She promised to follow the same goals between the US and India. “We have good relations with India, but a person born and brought up in India is going to bring a whole new perspective, ” she said.

Asked to comment on the diplomatic fallout of the Devyani Khobragade episode, she said she was not privy to the inside story yet. “I don’t want to comment on something that I do not know everything about. I have to say that when I am in DC, I will know more about it and will be able to do something that is positive (and best) for both countries.”

Dandekar said she would work to pass the immigration reform bill because it was important for the US economy. However, she believes that the bill that passed the Senate needs some work.

The former state senator who is running on the platforms of education, job creation and technology said these were important policies to work on in a global economy.

“It doesn’t matter whether you are in Iowa, Georgia or in DC, these issues are national issues. They help all states, not just Iowa. This explains why I have support from all over the country. People know I am one person who will find common ground across party lines. It doesn’t matter whether you are a Republican or Democrat. It is important for us as a country to find that common ground to work for what is best for our nation. When we do what is best for our nation, we all progress. I have done that in the Iowa house. I have worked across party lines, because to me finding that common ground is strength. It is not a weakness.”

“I have shown this time and time again. It is strength to say you may be Republican but you have a great idea and I will work with you,” she added.

Responding to a question about why such few Indian-Americans are in politics, she said, “I ask all of you to start educating my brothers and sisters on why it is important for us to get involved in politics and policy. I want you to be on the table, and help me think about good policies that are important to Indian-Americans. I say the same thing to my Iowa citizens.”

Dandekar said Iowa (which is 92.8% white, according to the census) is a progressive state and Iowans are proud of her heritage. At the press meet, she was excited about receiving the endorsement of the National Organization for Women (NOW) that day. NOW is the largest feminist organization in the US.

“Throughout my career as a legislator, I have worked to promote women’s equality not only in Iowa and the United States, but also internationally.  I will continue to use my voice as the first Indian American woman elected to United States Congress to work to end violence and discrimination against women worldwide,” she said.

Dandekar is from Nagpur in Maharashtra, and has a bachelor’s degree in biology and chemistry from Nagpur University and a post graduate diploma in dietetics from Bombay University. She and her husband Arvind, (who accompanied her to Atlanta), have two sons and three grandchildren.

“I am extremely grateful for the support of everyone who attended the event,” Dandekar said after the fundraiser. “The continued support of the Indian American community throughout my campaign has meant so much to me both personally and professionally. But we cannot stop now. The next two months are extremely crucial to the campaign and will ultimately determine the path to Washington.”