People of all ages and socio-economic spheres of Atlantaswarmed to witness this sold-out and much anticipated event. Going by the logistics, this successful event was able to captivate about 500 people and was attended by over 100 children.

This time, the three poetic gems that were mined from Indiawere famed humorist and laughter challenge winner Gaurav Sharma, melodious vocalist and ghazal singer Dr Sonroopa Vishal, brilliant satirist and Yash Bharati awardee, Smile Man Sarvesh Asthana ji. These poets of excellence kept the audience tucked in their seats enjoying a mélange of characters, anecdotes and reflections all the while bristling with contagious laughter and energy. It was an audio-visual treat to enjoy the resonance that lies within words. The glimmer of the poets was alike whether it was to accumulate depth of emotion or to create a laughter Tsunami. Nostalgia poured in as laughter bound people revisited antics and anecdotes from the past to bring that long forgotten smile or laughter back to them.

Consul D.V. Singh and other guest invitees attended the event.

Sarvesh Asthana took the stage first to fill the venue with the fluidity of his laughter. He ensured that all funny bones are tickled with his tongue-in-cheek humor and satires alike in the forthcoming hours. Gaurav Sharma was equally successful in engaging the audience with his frivolous and light-hearted humor. Sonroopa Vishal enthralled the audience with her nightingale voice and thought-provoking poetry. Her rendering of her father Urmilesh’s poem “Ladkiyaan” carried a tremendous body of philosophy. The poets were able to transport audiences from the state of “being” and “not being” to “being” and “becoming” with their subtle reminders of social causes tempered with laughter, satire and humor.

Each year, Atlanta Hindi Association recognizes motivating personalities from South East Asian Community in Atlanta area. This year, the spotlight was on the ever charming ‘camera girl’ of Atlanta, Anjali Chhabaria for her excellent service in the field of Art and entertainment.

The organizers of this event ensured that kids of all ages were creatively engaged while the parents enjoyed a relaxed evening. Art class, face painting, henna tattoos, and snacks were arranged to keep the kids entertained. 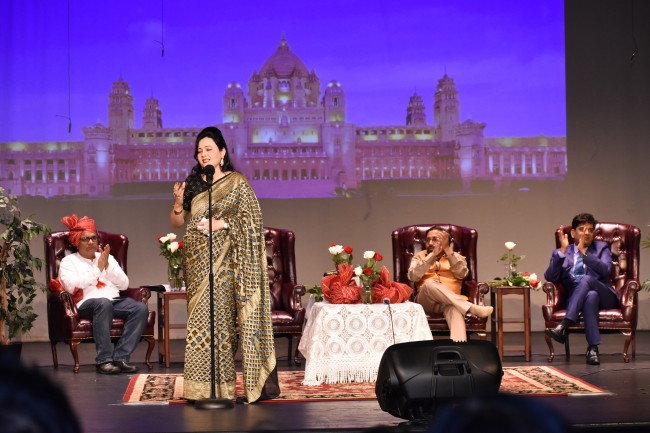 This event was hugely successful in capturing the dynamism of laughter/hasya which looms over the horizon in today’s busy life but never comes closer. Atlanta Hindi Association was able to bring it to us, beyond the narrative, in the realm of reality and promises to keep bringing this laughter spectacle back toAtlantaevery year.