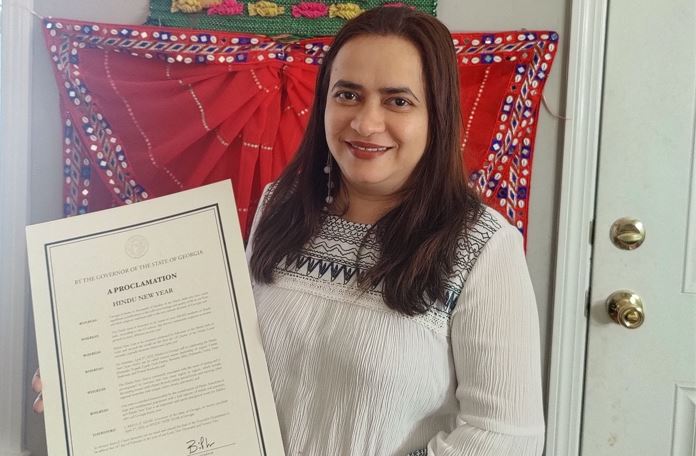 Atlanta, GA, April 29, 2022: Governor Brian Kemp, in a proclamation, declared April 02, 2022, as Hindu New Year in the state of Georgia. The efforts were initiated by Sudhir and Swati Agarwal, co-founders of Sprinkling Smiles along with Gokul Kunnath, President, USHA (US Hindu Alliance).

“There are various celebrations which take place in many sections of the Hindu community in the month of April / Chitra and a lot of research went into selecting the date 2nd April,” Swati Agarwal said. The first day of Chaitra month of Hindu (Lunar) calendar heralds the onset of spring. The day is celebrated with different traditions across different states with different names. While it is Gudi Padwa in Maharashtra, in Gujarat, it is the first day of the 9 day festival of Chaitra Navratri, dedicated to Shakti (the feminine form of the Supreme). Followed by Ram Navami, the day of victory of good over evil, Ugadi in Karnataka and Andhra, Baisakhi in Punjab, Vishu in Kerala, Pohela Boishakh in Bengal, etc. Mythological references state that From the sunrise of this day, Brahma, the Creator, started the creation of Srishti, the ever-expanding multiverse and also that this day marks the coronation of Bhagawan Shri Ram, an Avatar of Vishnu and the King of Ayodhya, amongst others.

The purpose of the proclamation, Agarwal said was to raise awareness among diplomats and social leaders about Hindu culture and traditions. “Our presence and culture are based on many scientific reasonings which require understanding and recognition.”

Agarwal added that the Governor and his officials appreciate the support of the Hindu Community towards progress in all sectors of development and look forward to various joint initiates with the community leaders and have scheduled meetings for future projects on awareness of Hinduism and Hindu way of life.

Georgia is home to thousands of families of the Hindu faith who have made significant contributions to the collective heritage and quality of life in our State, and their religious traditions add to the rich cultural diversity of Georgia; and

The Peach State is fortunate to be home to over 200,000 residents of Hindu faith. According to the US census, this diverse community supports economic growth in many different sectors; and

Hindu New Year is an occasion celebrated by followers of the Hindu faith in India and around the world on the first day of Chaitra of the Hindu Lunar calendar, typically between March and April; and

On Saturday, April 02, 2022, Hindus in Georgia will be celebrating the Hindu New Year, which can be called various names depending on region: Varsha Pratipada, Yugadi, Ugadi, Gudi Padwa, Baisakhi, Bihu, Puthandu, Vishu, Pana Sankranti, Pohela Boishakh; and this is also the first day of the 9 day festival of Chaitra Navratri dedicated to Shakti (the feminine form of the Supreme) and

The Hindu New Year is commonly associated with the onset of spring and is accompanied by customs that vary from region to region, which include decorating homes with vibrant flowers, eating special foods, and enjoying other regional festivities with unique colors, rituals, and music; and

Our state is enriched immeasurably by the contributions of Hindu Americans, a large and multifaceted population with a lush tapestry of beliefs and practices, and Hindu New Year is an important and much-anticipated event for Hindus who call Georgia home; now

I, BRIAN P. KEMP, Governor of the State of Georgia, do hereby proclaim April 02, 2022, as HINDU NEW YEAR in Georgia.

In witness thereof, I have hereunto set my hand and caused the Seal of the Executive Department to be affixed this 14th day of February in the year of our Lord, Two Thousand and Twenty-Two.