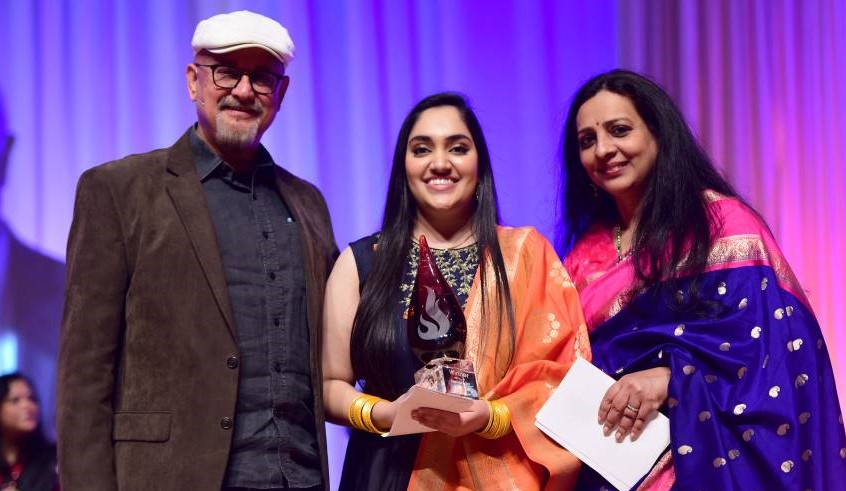 Koyal Ansingakar’s flawless rendition of Kuhu-Kuhu Bole Koyaliya in the semi-final and Der na hojaye in the final round secured her victory in the senior category. The phenomenal rendition of Jo mere dil ko dil banati hain by Sripriya Srinivas whose rich, deep voice seemed to emerge from a bottomless pit within soaring effortlessly above the crowd to reach the ears and hearts of everyone including the judges, took home the crown in the Junior category.

The championship round was the culmination of several qualifying rounds held through December 2019. Charged with energy and melody, the almost five-hour long program included high-octane dance performances from students of several dance academies. The championship, which follows the same format as American and Indian Idol, kept up the standards with high caliber judges who provided feedback and encouragement after each performance. Contestants were judged on various aspects of their performance including rhythm, diction, tonal quality and accuracy and overall mastery of style etc.

“Year 2020 is a landmark year in the  history of IACA. This is IACA’s 50th year of existence. We have started the year with a bang. This event will help IACA achieve greater heights during this very important year. Kudos to President Tushar Sanghvi and Program Director Dr. Raktim Sen and the rest of Atlanta Indian Idol team. Every detail of the event was carefully executed, “said Dr. Yogesh Joshi, Chairman, IACA, also commending the sound system at Lassiter and the artistic décor.

Jyotsna K Nanu’s soulful rendition of Saanware secured first runner up position and Kasturi Banerjee who sang Yeh mera dil was the second runner-up in the senior category, which saw 12 contestants battle it out for the champion’s trophy in the semi-final round. Six singers were eliminated in the semi-finals, and the six who made it to the final round gave it their all for the trophy. Shreya Khanna singing Jiya Jale was the first runner up and Anushka Chaudhury’s “Tandi Hawa” and Anjali Kandur’s (joint) Nachdi Phira won them both second runners up position in the junior category which comprised of outstanding singing talent this year.

Senior Sanika Pendse with 624 votes and Junior Shreya Khanna with 455 votes were winners of the Audience Appreciation Award, a contest that polled in highest scoring Reactions (likes, love, exclamation, etc) on Facebook of all 89 contestants, who auditioned to enter the contest.

SMS Polling system by TextByChoice offered an interesting addition, allowing the audience to vote for their favorite singers by texting the codes provided. Koyal Ansingkar with 130 votes in the Senior category and Sripriya Srinivas with 141 votes in the Junior category were winners of SMS Polling.

“28 juniors and 60 seniors auditioned for a spot in the Grand Finale of which 12 very talented singers in the SENIOR group and 8 budding talents in the JUNIOR group qualified. Such is the talent level that, as the Program Director, I have started thinking about tie-breaking rules! The poise, maturity and talent of the juniors assure me that the next generation is in very good hands!” said Idol impresario, Dr. Raktim Sen. Dr. Sen picked Senior Jyotsna K Nanu and Junior Sripriya Srinivas for the Director’s Choice Awards, who were his personal choices.

The evening began with wonderful renditions of the national anthem of the USA by Dr. Srijita “Tuly” Kumar and India by Asawari Joshi, Champion, AII 2016.

An enigmatic performance by students of Kalaivani Dance Academy, synchronized, striking formations by students of Deeksha School of Performing Arts, energetic piece by Shiv’s Institute of Dance and vibrant fusion show by Geet-Rung School of Music and Dance only elevated the complete Bollywood experience.

Brainchild of Chand Akkineni, Event Director, AII made its foray in 2013 opening to resounding success. “We wanted to create a platform to identify talented singers in Atlanta to promote and create visibility for their performances. Today, many of the past winners are performing in different events in Atlanta. We gave them an opportunity and they have been promoting our brand. This year, we were back with a bang of 94 talented contestants,” said Akkineni.

“I got into this to nurture my passion of music and it was gratifying to see it bear fruition in a fabulous way. Everything from the venue, decor, and singers, turned out to be outstanding,” said Bina Desai, Fundraising Chair.

Koyal Ansingkar, who claimed her winning title as a contestant in the Junior contestant in IACA Atlanta Indian Idol 2015 went to sweep the championship of AII 2020 in the Senior category as well.

Currently a student at Georgia Institute of Technology pursuing a degree in Industrial Engineering and a career in medicine, Koyal has always been passionate about music. She is a recipient of the prestigious Gold Scholarship at Georgia Tech and plans to continue her pursuit of music, both Hindustani and western classical, along with her studies.

Having trained with Pandit Pritam Bhattacharjee for six years, she has performed for Sangeet Martand Pandit Jasraj and received his praise. Koyal has shared her talents with national audience as a member of Georgia Tech’s premier South Asian A Capella group, Taal Tadka.

Koyal is an accomplished violinist in western classical music, having served as the concertmaster for the Youth Orchestra of Greater Columbus for four years in high school. She began her violin studies early on, at age of four, going on to become Omaha, Nebraska’s KVNO Classical Kid in 2008. Koyal attended the Georgia Governor’s Honors Program in 2014, as a violin student, and became a member of the Columbus State University Violin Studio in 2015.Koyal learnt to give back to society early on too. In 2016, Koyal held her own concert featuring golden age Bollywood music, and raised $2000. She used this money to found Youth in Unison, a program that gives free music lessons to underprivileged children.

Atlanta Indian Idol (AII) 2020 winner in the Junior category, Sripriya Srinivas wowed the judges and the audience with her flawless and euphonious rendition of Jo mere dil ko. Such was the impact of her succulent voice that she was rewarded with a standing ovation by the judging panel.

Success however has been a constant companion to this 11th grader who also walked away with the winning title at the International Indian Icon (3iii) award held in Chicago in December 2019, where popular Bollywood music composer Jatin Pandit presided as the judge. Prior to that, she was declared State Icon for Georgia by 3iii. She won the Star Kalakaar award in Dallas in November. She was awarded NAVIKA Kogile title in Ohio in August 2019.  She secured second place at the Saptami classical music contest in Atlanta. She has worked with Sunita Anathaswamy and Jayanth Kaikini, a famous lyricist in the Kannada film industry, for a Kannada Bhavageethe album. She is also working with other music composers to create devotional music album

Sripriya’s musical journey began early on, at age 5 when she started training in Hindustani classical music from Indrani Banerjee in Delhi. She went to train in Carnatic style since 2014 in Atlanta from Gayathri Vasanth. She dreams to make her mark as a playback singer in the Indian film industry.

Sripriya plays multiple instruments like Harmonium, Key Board, Xylophone, Drums, and has created few mashups by collaborating with Jyotsna Rao, another budding singer (a finalist in AII 2020) and has her own YouTube Channel “Voice of Sripriya Srinivas”.

“The only musical connection in the family is perhaps her grandmother Rukmini S.V, who is a Veena artist. Rain or shine, she does rehearsal for 3-4 hours on daily basis,” says mom Padmini Srinivas.