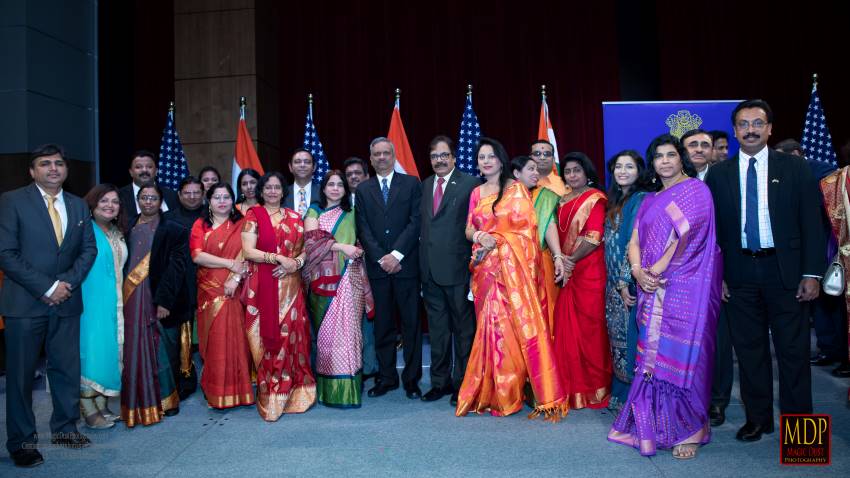 Atlanta, GA, February 6, 2020: Well over hundred people gathered at the office of Consulate General of India, Atlanta on a cold morning in January 26, 2020 for the Flag Hoisting Ceremony to mark the 71st Republic Day of India. The occasion was also celebrated in the evening at the Studio Theater at the Sandy Springs Performing Arts Center.

This year’s celebration also included demonstrations in support and against the Citizenship Amendment Act (CAA) passed by the Government of India.

Republic Day honors the date on which the Constitution of India came into effect on 26 January 1950 replacing the Government of India Act (1935) as the governing document of India, thereby forming a new republic.

As Consul General Dr. Swati V. Kulkarni unfurled the Tricolor, the patriotic fervor was quite evident with the singing of the National Anthem. An energetic instrumental ensemble of Dhol and Indian trumpets elevated the nationalistic milieu. Dr. Kulkarni read out the Indian President, Ram Nath Kovind’s address to the nation. She also highlighted the same during her address at the evening gala.

CAA seeks to amend the definition of illegal immigrant for Hindu, Sikh, Parsi, Buddhist and Christian immigrants from Pakistan, Afghanistan and Bangladesh, who have lived in India without documentation. They will be granted fast track Indian citizenship in six years. So far 12 years of residence has been the standard eligibility requirement for naturalization. While center argues that these minority groups have come escaping persecution in Muslim-majority nations, protestors argue that the act ringfences Muslim identity by declaring India a welcome refuge to all other religious communities.

Supporters with slogans and banners expressed their approval of the act. There were protestors as well.

The sprawling Studio Theater was brimming with a sea of people, so much so, that there was no seating available and a large number of them had to stand and watch the proceedings.

Dr. Kulkarni recognized Dr. Jagdish N. Sheth, Charles H. Kellstadt Professor of Marketing at the Goizueta Business School of Emory University, who was one of the 16 illustrious honorees of the Padma Bhushan, which is awarded to distinguished service of high order this year. She also recognized Presidents of all organizations, the media, and all her guests.

WATCH OUR VIDEO COVERAGE OF THIS EVENT

Reading from the President’s address, Dr. Kulkarni’s speech focused on the various achievements of the Indian Government.

Students of Subhatra Sudarshan, NNKB, and a dance medley choreographed by Neeta Surange wowed the audience with their vigorous and vibrant dance performances.

A sumptuous spread of Indian delicacies by Madras Chettinaad restaurant completed the festivities.

Some highlights from President Kovind’s address.

Reinforcing constitutional ideals. he said, “It becomes easier for us to follow the constitutional ideals, if we keep in mind the life and values of the Father of our Nation. By doing so, we will be adding a meaningful dimension to our celebrations of 150th birth anniversary of Gandhiji.”

President Kovind urged people, particularly the youth, to remain non-violent when fighting for a cause and stressed on the need to “hold fast to constitutional methods” of achieving social and economic objectives.  His remarks come in the backdrop of protests against the CAA although he made no reference to them.

He praised ISRO for its achievements in space exploration and said the nation is eagerly looking forward to the success of Indian human spaceflight program.

“In India, knowledge has always been considered more valuable than power, fame or riches. In our tradition, educational institutions are respected as temples of learning. When our land was pushed into backwardness after the long colonial rule, it was education that emerged as a path to empowerment,” he said about Education.

“As India and Indians march forward, we remain committed to engaging the global community to build a secure and prosperous future for ourselves and for the entire humanity,” said President Kovind.