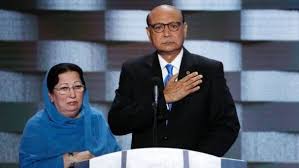 Washington, Aug 2 (IANS) The father of the slain Muslim US soldier at the centre of a controversial feud with Donald Trump said on Monday he had no desire to escalate the conflict and that it’s time to “join hands with good Muslims”, even as the Republican presidential candidate attacked him again on Twitter.

Meanwhile, President Barack Obama joined the fray later on Monday, implicitly rebuking Trump for his comments, while his party member Senator John McCain condemned businessman-turned-politician’s remarks and urged the GOP nominee to “set an example for the US.”

Khizr Khan, the soldier’s father, was a guest on “New Day” on CNN on Monday with his wife Ghazala Khan, and delivered the criticism of Trump amid an extended plea for unity and empathy.

“Communities coming together is the solution. We are as concerned as Donald Trump is about the safety of this country. We are a testament to the goodness of this country,” he said.

“We need a leader that will unite us, not disrespect, not by derogatory remarks. I feel bad about the discourse that this campaign, this election campaign has taken.”

“That’s all I wish to convey to him. That a good leader has one trait — earlier I said — empathy.”

Though Obama’s comments to veterans in Atlanta on Monday afternoon didn’t mention Trump by name, the President seemed to offer support to Khan’s perspective.

“No one has given more for our freedom and our security than our Gold Star families,” Obama said, adding that those families “represent the very best of our country.”

“They continue to inspire us every day and every moment,” CNN quoted Obama as saying. “They serve as a powerful reminder of the true strength of America.”

Khan, in his appearance on “New Day”, exhorted Trump to take policy steps that would curtail extremism, not exacerbate it.

But even as the Khans expressed their desire to leave the controversy behind, Trump responded to the criticism during the interview on Twitter.

He wrote, “Mr. Khan, who does not know me, viciously attacked me from the stage of the DNC (Democratic National Convention) and is now all over T.V. doing the same – Nice!”

Trump also tweeted that the focus should be on “radical Islamic terrorism,” not the Khans.

“This story is not about Mr. Khan, who is all over the place doing interviews, but rather RADICAL ISLAMIC TERRORISM and the U.S. Get smart!”

Trump’s criticism of the Khans sparked a major attack from the Clinton campaign — and a severe backlash within his own party.

On Monday morning, Senator John McCain issued a sharply-worded statement condemning Trump’s remarks and calling on the GOP nominee to “set an example for our country and the future of the Republican Party”.

In the statement, McCain wrote: “In recent days, Donald Trump disparaged a fallen soldier’s parents. He has suggested that the likes of their son should not be allowed in the United States — to say nothing of entering its service. I cannot emphasize enough how deeply I disagree with Mr. Trump’s statement. I hope Americans understand that the remarks do not represent the views of our Republican Party, its officers, or candidates.”

“In the end, I am morally bound to speak only to the things that command my allegiance, and to which I have dedicated my life’s work: the Republican Party, and more importantly, the United States of America. I will not refrain from doing my utmost by those lights simply because it may benefit others with whom I disagree, CNN quoted him as saying.