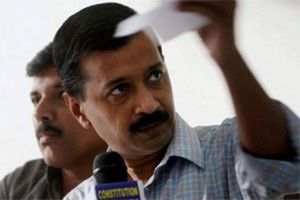 “Kejriwal is out to ignite a revolution,” says the prestigious magazine in putting him on the 32nd spot of its list of people who have made a “measurable difference” and are “pushing the boundaries of the possible”.

“India’s elite have good reason to be worried about Kejriwal,” the magazine said.

“The country was rocked by a series of anti-corruption protests just two years ago, and in a poll released in July, 71 percent of respondents said corruption is getting worse.”

The list was topped by former National Security Agency (NSA) contractor Edward Snowden, “for exposing the reach of government spying”.

It also includes US Secretary of State John Kerry “for betting on Middle East peace when no one else would”, Iranian President Hassan Rouhani “for opening a door” and UN Human Rights High Commissioner Navi Pillay.

Butalia, the founder of India’s first feminist publishing house, and Krishnan, secretary of the All India Progressive Women’s Association, “aren’t just thoughtful activists: They are formidable, front-line opponents in the battle against India’s scourge of sexual violence”, the magazine said.

The Intergovernmental Panel on Climate Change, led by India’s Rajendra Pachauri was listed 42nd “for showing that humanity is on the brink of catastrophe”.

Other Indians or people of Indian origin in the list include Rohit Wanchoo, one of the four founders of GiveDirectly organisation, “for trusting the poor to spend their money wisely”.

Anand Grover, a human rights lawyer and the UN special rapporteur on the right to health, makes it “for going to the mat with Big Pharma”.

Naval Ravikant, co-founder of AngelList, an online platform that connects investors with start-ups seeking funding, is listed for “throwing open the gates to venture capital”.