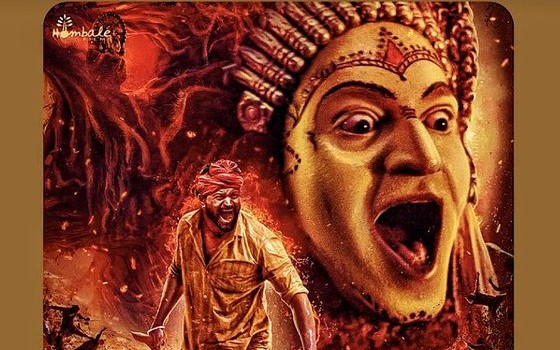 When my friend Hema invited me to join her to watch Kantara, the movie had already received a rousing reception and established its credentials as outstanding cinema, garnishing accolades from not just across Karnataka, but nationally and internationally. So, my expectations were high. But what I didn’t expect, was for Kantara to exceed expectations beyond my wildest imagination! This is not just a movie – this is an electrifying experience par excellence.

India, home to a vast, diverse population houses a plethora of histories, legends, and stories alongside many traditions, faiths and cultures. Rishab Shetty’s Kantara brings alive the coastal Karnataka culture seamlessly, amalgamating mythology, mystery, action, adventure, and faith to narrate a tale rooted in its land. At its core, Kantara (which translates to Mystical Forest) is a monumental effort to unify nature, the divine and humanity. The regional beliefs and traditions of Coastal Karnataka such as the dance of the Bhoota Kola and Kambala race take center stage.

Shetty’s Shiva, as the man possessed by demi-gods Panjurli and Guliga, is chilling and terrifying in the beginning but almost tranquil and calming, as the movie climaxes. Yes! The very shrieks that sent that chill down your spine arouse the aura of the Daiva eventually – such is the intense, immersive experience.

The opening takes us back to 1847, where the King is restless despite all his worldly possessions. His pursuit for peace leads him to the divine – and he trades a large expanse of the land to the local tribal community in exchange for contentment.  Fast forward to a hundred years, an arrogant successor of the King’s lineage demands that the land be returned to his family, infuriating the demigod Panjurli. The descendant dies a painful death throwing up blood.  Soon after the malediction, the demigod runs off to a forest and disappears, leaving his very young son running right after him.

In 1990, the year in which Kantara is set, an upstanding forest officer Murali, played brilliantly by Kishore, arrives with the intent to curb tree felling and hunting in the very same land, which is now a reserve forest. The villagers, who believe that the land was a boon from their Daiva–the demigod protector of the forest, oppose the officer. Leading the locals is the gallant but hot-headed Shiva (Rishab Shetty) who is still a playful man, hunting boars despite his mother’s staunch disapproval, with constant run-ins with the law and the landlord’s henchmen, while being haunted by nightmares of running into a Bhootha Kola performer in the depths of the forest.  Shiva is supported by the king’s descendant, a treacherous feudal lord Devendra Suttooru, powerfully portrayed by Achyuth Kumar whose switch in character trait is rendered inconspicuous, thanks to his effortless, organic delivery.

Kantara delves deep into the elemental conflicts of man versus nature, of rich verses poor, the primitive thirst for land and money and the role of the divine. Murali who fights to preserve nature, is Shetty’s representative of nature itself while Shiva, fighting for his people be able to protect their livelihoods through the forest, represents man. When Shiva takes on the officer, the feud of man v/s nature comes into play. Shetty also brings forth the ethical and moral dilemmas the two men face in the pursuit of their passions. Their conflict is resolved when they join forces to face off with the malevolent landlord. Shiva, possessed by the spirit, hears the shrieks of Daiva (as he has before) and runs into the forest where he meets another Kola dancer.

Shetty lets the viewer draw their own conclusions about the other Kola dancer – it was perhaps Guruva, Shiva’s cousin and Kola dancer, or his dad who had disappeared many years ago? Or the representation of all other Kola dancers who were united with the Daiva?  Shetty’s Divine is the binding medium through which man and nature come together as Murali and Shiva do in the final shots and learn to peaceful coexist with each other.

Shetty has a built-in mechanism to steer even the most serious cinema towards a complete masala mass entertainer. So, there is no dearth of humor cleverly embedded within conversations among Shiva and his friends – Bulla, Raampa, Sundara, Naaru, and Lacchu characters. Their impeccable comic timing in coastal dialect simply enhances the local flavor. I particularly enjoyed the scenes where the switch from fear to comedy is instantaneous.

Kantara draws much of its strength from its screenplay, also penned by Shetty. The transformation of a wayward Shiva – often defying his mother, romancing the village forest guard Leela (Sapthami Gowda) and frolicking with his friends, to an awakened spirit is perfectly paced. The epiphanies he often woke up to were perhaps his calling. Just as we foresee a the cliched conclusion, Shetty pulls a fast one, closing with an unforgettably spellbinding climax, that is bound to cast an everlasting imprint on the viewer long after the curtains are down.

Shot against drop-dead gorgeous scenery and boats of a scintillating color palette– the land, water, and its inhabitants spring to life in Arvind Kashyap’s captivating cinematography and certainly forms the highlight of this magnum opus. Kashyap’s meditative shots zoom into the characters and sequences with an acute eye, capturing the locales in all its raw and rustic glory. The Bhoota Kola and Kambala race sequences stand testament to his exquisite, aesthetic takes. The magnificent musical score by Ajneesh Loknath only compliments the cinematography working in tandem, to create an eclectic and exceptional cinematic experience. Varaha Roopam Daiva Varishtam, doused in divinity, reverberates uniquely, terrifying and calming at the same time. The multitalented Raj B Shetty’s mesmerizing choreography simply marries with the local rustic milieu set by the director Shetty.

What makes this work? Ultimately it is the right choices of the filmmaker to stay true to himself that contributes to his colossal success.  Rishab Shetty shines bright as the actor, director, and writer, infusing his own experiences into Kantara, even shooting in his hometown of Keradi. Shetty does not compromise even on the dialect which he chose to keep colloquial. Instead of diluting folklores and practices, Shetty chooses to maintain the original, but ensures that the narrative is vividly and delightfully rooted in the heartland, staying true to its traditions and people., transporting the viewer to his mystical world – a visual marvel laced with technical brilliance.

In a trance for the final 20 minutes, the vivacious colors, the ethereal music and the guttural screams are etched in my memory forever. Kola, Kambala and the Daiva are housed in my heart for eternity. The true victory of this movie is that it stays with you.  If you haven’t already, you must explore this Kantara. It is enchanting, enticing, and energizing. Experience it for yourself.

*Jyothsna Hegde is the City News Editor of NRI Pulse.