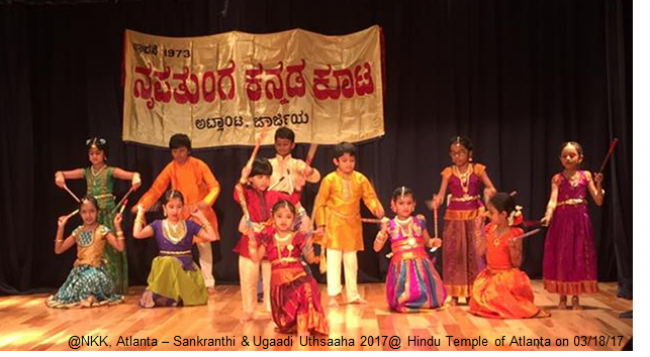 Sankranti is the Hindu festival of harvest and falls on January 14th of every year, while Ugadi is an important festival celebrating the New Year for people from Karnataka, Andhra Pradesh and Telangana. This year’s festivities featured many colorful and exciting cultural programs with participants of all ages, screenings of two original Kannada short films, and an interactive session with Police and Law departments.

Consul D.V. Singh and Dr. B. Krishna Mohan and his wife also attended the program as chief guests. 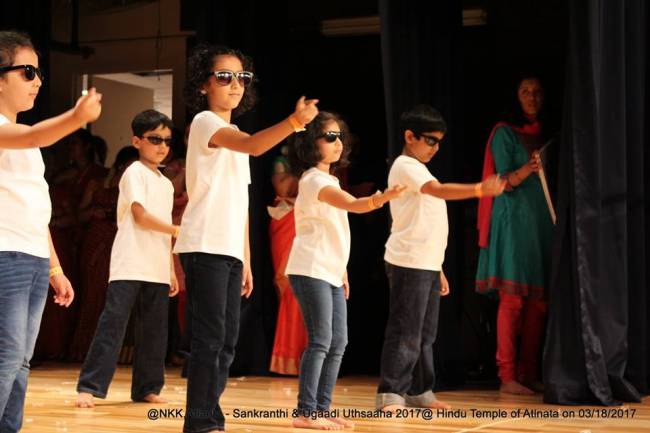 Following the recitation of prayer and the American National Anthem, the evening’s merriment began with a series of children’s dances, some of which were choreographed by children themselves. Tiny tots and young adolescents, and all children in between, set the atmosphere for a night of enjoyment by lighting up the stage in vibrant costumes to a variety of popular Kannada songs both old and new, with a shared theme of joy, energy, and passion. Soon after, a large group of adults ascended the stage to enthrall viewers with a charming presentation of Kannada folk songs.

Cultural programs were then paused for an introduction of the new executive committee, presentation of a scholarship from Drs. Subramanya and Anu Bhat, and an interactive information and panel session with the Police and Law departments. 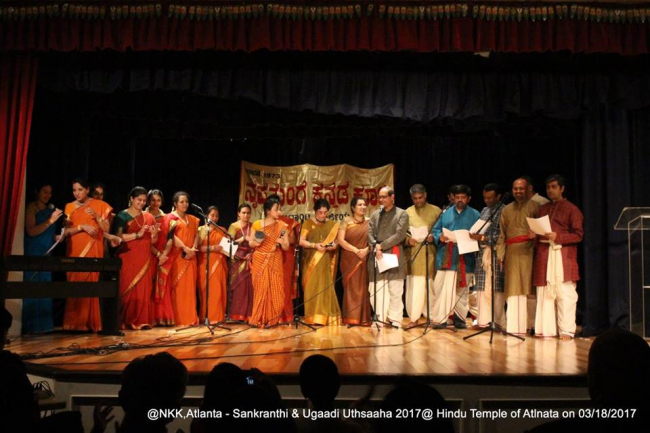 Nick Roberts of the Henry County Police Department and his wife Judge Pam Ferguson of theClayton County Probate Courtspoke to the audience about taking precautionary measures and police action in the case of racial hate crimes or robbery. Their presentation helped alleviate some of the growing fears of racial hate crimes in the Indian community.

Consul D.V. Singh advised audience members to reach out to the Consulate Office at anytime for any reason and reminded everyone to act as a community and get more involved in Consulate events.

The second half of the cultural celebrations continued with high energy dances from some of the older children and adults. Talented children and ladies took to the stage to captivate the audience with fantastic displays of skill and fluidity. Mothers reminded the audience that no one is ever too old to dance or celebrate in a classical take on modern dance and music.

Despite the night’s cultural programs coming to a close, the night was far from over. The audience witnessed two feature presentations of original Kannada short films “The Last Kannadiga” and “Refill” produced by Shruti Hariharan and actors Vashista Simha – from Godhi Banna –  and Ashwin Rao Pallakka – from Kirik Party. “The Last Kannadiga”, set in a future where reading and practicing Kannada is obsolete, warned viewers against letting one’s mother tongue and culture die out and encouraged everyone to embrace their language and pass it on in all its forms. The central message of  “Refill” was to not take life for granted.

A marvelous evening of dazzling dances, melodious songs, informative presentations, and outstanding short films concluded with a Vote of Thanks and the Indian National Anthem, leaving guests excited for the next Nrupathunga Kannada Koota Event. As per tradition, participants and audience members enjoyed a delicious dinner. An added delight of authentic holige, which was sponsored by Hanuma Vega International Courier, was also served.