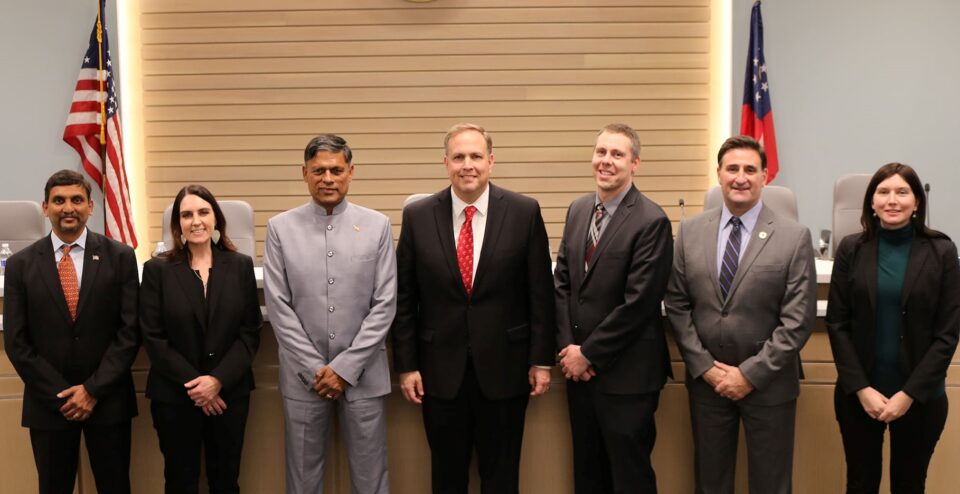 Erramilli and Tunki took their oath of office on the Bhagavad Gita.

“Public service is a calling and not for everybody. I am thankful to each of you for deciding to answer the call for public service and I am incredibly hopeful for our future,” Mayor Bradberry said in his opening remarks.

The election of mayor pro tem, a position that authorizes a council member to perform mayoral functions in case the mayor is absent or disabled, was among the agenda item for the meeting.

Citing his seniority and public service on the council, Councilwoman Erin Elwood nominated Chris Coughlin to the position. DiBiase nominated Councilwoman Stacy Skinner for the position, citing her leadership of her neighborhood board, experience on the board of zoning appeals and leadership he said she provided during the campaign process.

Coughlin shared plans to make the term for mayor pro tem, saying he would resign after one year, if elected. Shortening the term, Coughlin said, would “give every council member a seat at the table.” Skinner said she would do the same.

Chris Coughlin was awarded the role on a 4-3 vote. Coughlin has served in the Post 4 seat since first elected in 2015.  Coughlin drew votes from Bradberry, Elwood, Tunki and himself. “The choice I wanted to make was to do the right thing. Pick a senior member who would give us some direction,” Tunki said about his choice for Coughlin as mayor pro tem.

Last few months, my interactions with Stacy gave me a new respect for this person. She is the president of the largest neighborhood int eh city of Johns Creek. What baffled me was that this person resigned from her job to execute the position of Johns Creek city council member. That to me shows extraordinary level of commitment,” Erramilli said about his choice, Skinner. Skinner, DiBiase an Erramilli voted for Skinner.