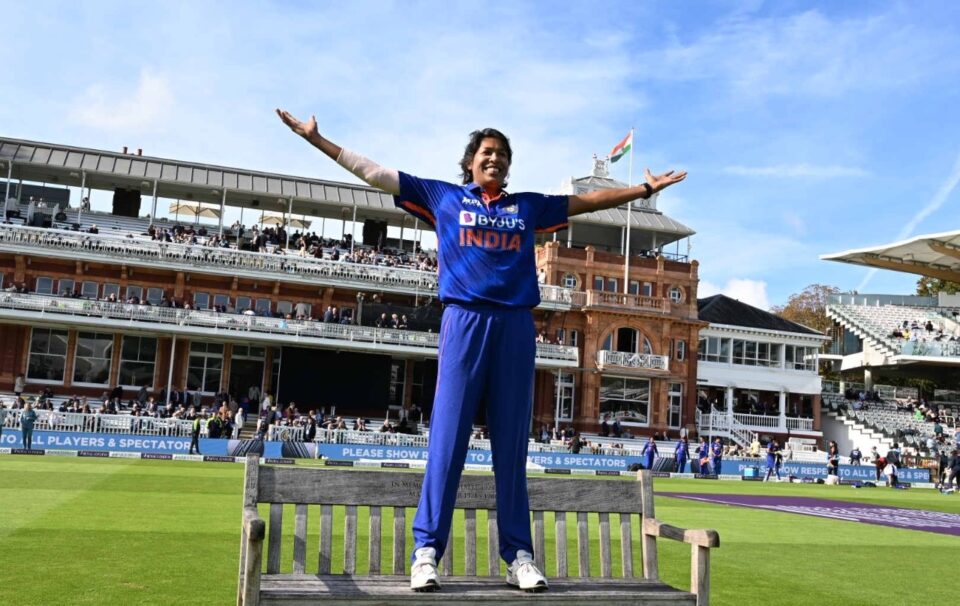 Jhulan Goswami, is a right-arm medium fast bowler and right-handed batter. She was born on November 25, 1982, in Chakdah, West Bengal. She was attracted to cricket when she watched Australian batter Belinda Clark in the 1997 Women’s Cricket World Cup. Chakdah did not have any facilities, so she used to get up around 4.30 a.m. and travel to and fro by train to Calcutta for practice and matches. She soon made her mark with her towering presence and bowling with grit and aggression and her confidence-boosting role helped India team win many matches.

When 19, she made her international debut on 6th January 2002, in a One-day International Match against England in Chennai, and test debut also against England on 14th January, in Lucknow. Jhulan wanted to be a fast bowler so she went to MRF Pace Foundation in Chennai for tips from Australian pace bowler Dennis Lillee. She led the India Women’s Team from 2008-2011.

Among the prestigious Awards to veteran pacer Jhulan Goswami in appreciation of her illustrious career:

Many appreciatory messages and posts poured in after her retirement. India’s former Captain Mithali Raj reflecting on Jhulan’s glorious cricket career said, “It is the end of an era,”. “The impact she has had in women’s cricket at the global level is immense. She has been a great ambassador for the sport and youngsters took to fast bowling after seeing her bowl for India.” She further commented, “Jhulan Goswami’s commitment to the game and her eternal optimism are lessons for all those who wish to excel in the sport… the Indian jersey will miss her dearly.”

In a glowing tribute, India Women’s Cricket Captain, Harmanpreet Kaur said, “Goswami has been a true inspiration for all the players including herself. “She’s someone who has taught us a lot. When I debuted, she was a leader and I learned a lot from her”

Anushka Sharma, who will portray Goswami in the biopic ‘Chakda Xpress’ tweeted “An inspiration. A role-model. A legend. Your name will be etched in history forever”.

“It’s not just what she does on the pitch, she’s an absolutely lovely human,” said England batter Tammy Beaumont. “She’s been great for the game and she’ll be a very big loss but I think it’s great that she gets to have a good send off at Lord’s.”

Post retirement, Goswami has been appointed as a bowling consultant for India Women’s national cricket team, under the head coach Ramesh Powar.

“Women’s cricket in India slowly and gradually picking up. We can motivate young girls to play sport and have a career option in cricket,” said Goswami.

Chakda Xpress, the biopic of Jhulan Goswami, directed by Prosit Roy will premiere on Netflix.

The Thrill of Competing in the US Open is Unforgettable: Natasha Subhash