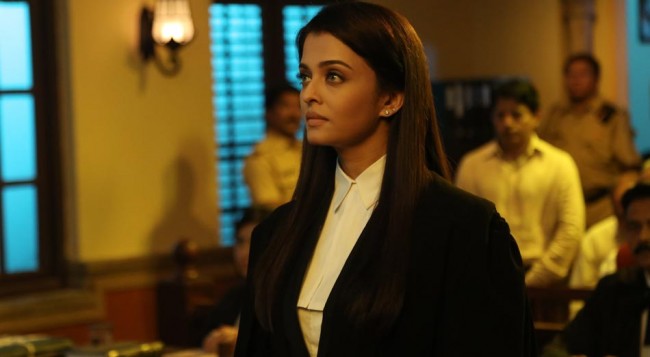 Anuradha Varma (Aishwarya Rai Bachchan) is a successful criminal lawyer whose life turns topsy-turvy when her young daughter Sanaya (Sara Arjun) is kidnapped suddenly. As ransom, she is compelled to handle the case of a murderer and rapist Niyaaz (Chandan Roy Sanyal) and has to ensure he walks out free.

Loaded with grey characters, “Jazbaa” is the transformation of a confident criminal lawyer into a helpless and frustrated mother, trying to rescue her daughter from her kidnappers.

Aishwarya, seen on screen after a long hiatus, has a pivotal role, which she fits to perfection. Confident, erudite as a lawyer, she portrays the anguish of a single mother searching for her daughter with equal ease and aplomb.

Irrfan as Inspector Yohan, who is Anuradha’s childhood friend, delivers one of his best performances. His character is multi-faceted: quirky, emotional, caring, efficient and corrupt. Cumulatively, these make his character interesting and endearing.

Convicted for the rape and murder of Siya, daughter of professor Garima Chowdhary (Shabana Azmi), Chandan Roy Sanyal as Niyaaz manages to look the part of a dodgy and brazen criminal, but tends to overdo his character in certain scenes.

Veteran actor Shabana Azmi with her commanding presence on screen, essays her character of an anguished mother, who has lost her daughter, brilliantly. Her balanced portrayal, juxtaposed with emotional but controlled outbursts, is a treat to watch.

Jackie Shroff as Mahesh Maklai, an ambitious and ruthless politician, is competent, but adds nothing new to this oft-seen character.

Siddhanth Kapoor as Sam Maklai, son of Mahesh Maklai, fails to impress even though he tries to bring histrionics to the screen in the bit role he has.

Atul Kulkarni, as the public prosecutor, merely mouths dialogues and delivers those well, as expected of an actor of his calibre. But it’s just another lawyer in a Hindi film. There is no nuance to his flat character.

The taut and well written screenplay, although inspired by a Korean film, “Sebeun Deijeu”, meaning “Seven Days”, is cleverly layered, giving the film an intrigue factor throughout. Never once is there a dull moment and the film keeps you riveted to the screen.

“Mohabbat hai, isliye to jaane diya. Zidd hoti, to meri bahon mein hoti” and “Race or case dono peecha nahin chodte.” Many such dialogues in the film are dramatically poetic, sharp and hard-hitting. Others with their sardonic tinge, elicit a chuckle or two in some scenes.

The music is subtly and cleverly used and there are no unwarranted song sequences to break the uninterrupted viewing experience. “Jane tere sheher ka kya irada hai”, sung by Vipin Aneja, is soulful and touches your heart.

Cinematographer Sameer Arya’s camera work is flawless and he adroitly captures the mood of the scene in a stylised manner.

Bunty Nagi’s editing is praiseworthy as he has seamlessly layered the film.

“Jazbaa” is a well made, stylish action-drama, with good performances, strong screenplay and distinctive cinematography. However, the picture-perfect designing of the film is over-egged, giving the film a glossy, albeit, synthetic and unreal look.

With ample thrill and entertainment, this one is a good weekend watch.