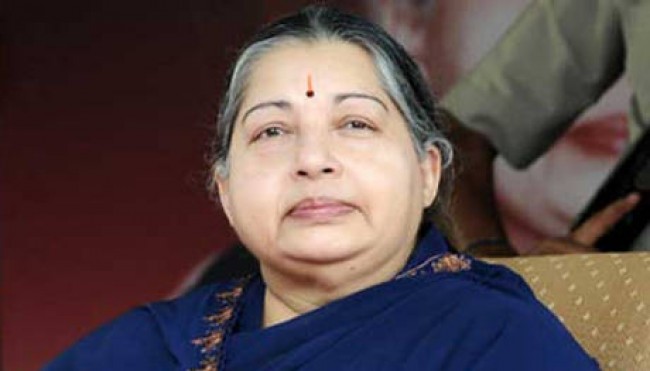 Chennai, Dec 5 (IANS) Tamil Nadu Chief Minister J. Jayalalithaa was in a critical condition after suffering a cardiac arrest on Sunday evening and is being treated by a team of specialists at Apollo Hospitals where she has been admitted since late September.

Crowds thronged the hospital while top leaders and common people across India prayed for her well-being and recovery.
“The Apollo TN CM #Jayalalita is critical.multi speciality team @hospitalsapollo trying everything including ecmo.praying for her recovery,” tweeted Apollo Hospitals Managing Director Sangita Reddy.
Earlier, the hospital said, in a statement: “The Hon’ble Chief Minister of Tamil Nadu who is undergoing treatment at Apollo Hospitals, Greams Road, Chennai, suffered a cardiac arrest this evening. She is being treated and monitored by a team of experts including cardiologists, pulmonologist and the critical care specialists.”
It later said in a tweet that she “is on extracorporeal membrane heart assist device and is being treated by a team of expert doctors and critical care specialists”.
“Dr Richard Beale from London has also been consulted and he has concurred with the line of treatment by our cardiologists & pulmonologists,” it said in another tweet.
In a later tweet, the hospital said: “The Hon’ble CM is the beloved leader of the masses. Please join us in praying for her speedy recovery. #GodblessAmma #Jayalalithaa.”
Maharashtra Governor C. Vidyasagar Rao, who has additional charge of the state, returned from Mumbai and visited the hospital to enquire about her condition.
While a large police contingent was deployed at the hospital, reports said that security was being stepped up across the state.
State ministers, senior officials and others gathered at the hospital, as did a huge crowd of AIADMK cadre, many of whom broke down while others fervently prayed for her recovery. Some tried to enter the hospital premises but were restrained.
President Pranab Mukherjee wished Jayalalithaa a speedy recovery.
“Distressed to hear about CM Jayalalithaa suffering a cardiac arrest, my prayers for her speedy recovery,” said a post on the President’s official Twitter account.
DMK chief M. Karunanidhi and his son and party leader M.K. Stalin also took to Twitter to convey their wishes for her speedy recovery.
“Wishing #jayalalithaa Hon CM of TN a speedy recovery, Let her be healthy soon,” tweeted Railway Minister Suresh Prabhu.
“Praying for Jayalalithaa ji’s quick recovery. I hope she gets better very soon,” said Congress Vice President Rahul Gandhi on his official Twitter handle.
West Bengal Chief Minister Mamata Banerjee expressed her concern over the health of her Tamil Nadu counterpart, and wished her a speedy recovery.
“Like my friends in Tamil Nadu, I am praying for her speedy recovery. May God bless her,” tweeted Banerjee.
“Got to know about Tamil Nadu CM #Jayalalithaa ji’s health. Maharashtra prays for her speedy recovery!” posted Maharashtra Chief Minister Devendra Fadnavis, while his Rajasthan counterpart Vasundhara Raje tweeted: “Prayers for the speedy recovery of Tamil Nadu CM #Jayalalithaa ji. May she get recover soon.”
Rashtriya Janata Dal chief Lalu Prasad tweeted: “Totally worried about the health of #Jayalalithaa Ji. Wishing and Praying for speedy recovery. Let’s all pray for her.”
The 68-year-old Jayalalithaa was admitted to the hospital for treatment of fever and dehydration on September 22. The doctors later said she needed a longer hospital stay as she was suffering from infection, and put her on respiratory support.
Recently Apollo Hospitals Chairman Pratap C. Reddy told media that Jayalalithaa is returning to normalcy, and had been shifted out of Intensive Care Unit as there were no health complications. She could go home whenever she decides to do so, he had said.

Indian American woman poised for historic election to US Senate