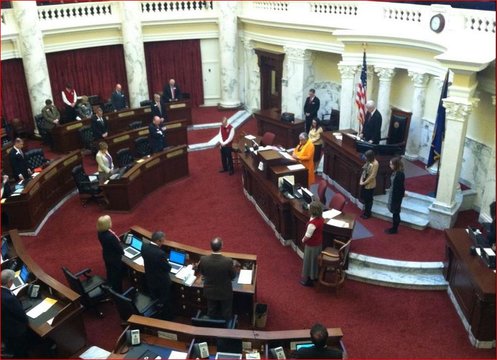 New York, March 4 (IANS) For the first time the opening prayer for the Idaho state senate was said Tuesday by a Hindu cleric amid protests by some senators who claimed the United States was a Christian nation and denounced Hinduism, local media reported.

Universal Society of Hinduism President Rajan Zed, who said the prayer in Sanskrit and English, made a call for the legislators to “act selflessly without any thought of personal profit” because “selfish action imprisons the world”.

He was invited by Senate President Pro-Tem Brent Hill to be a guest chaplain and deliver the invocation which is usually made by a Christian chaplain at the start of the day’s legislative session in Boise. According to The Idaho Statesman, when protests were made before the session, Hill said: “I reviewed the prayer. It did not seem offensive in any way.” He added: “It refers to ‘deity supreme’.”

Senator Steve Vick, who walked out of the Senate chamber before Zed’s invocation said that Hindu prayers should not be allowed because the US was “built on the Judeo-Christian not only religion but work ethic, and I don’t want to see that undermined”, the Statesman reported. Hindus “have a caste system,” he added. “They worship cows.”

He was one of the three Republican senators to boycott the prayer. Senator Sheryl Nuxoll said she boycotted Zed’s prayer because she believed the United States is a Christian nation and “Hindu is a false faith with false gods,” according to the newspaper.

But Hill, who is also a Republican, told the Statesman, “In my mind, you either believe in religious freedom or you don’t… We have had Jewish prayers, many denominations of Christian prayers.”

The Statesman quoted Zed as saying of the protests: “We don’t mind. Hinduism is more embracing.”

KTVB-TV said that Zed noted “that most of the legislators welcomed him warmly” and said, “We all have different viewpoints, and that is wonderful, that is what makes our country great.” He added: “We are all looking for the truth. If we can join our resources together, we can reach there faster.”

Senators from both the Republican Party, which controls the Senate, and the Democratic Party shook the saffron-clad Zed’s hand and thanked him for coming, the Statesman said.

The US does not have an official religion and the secular constitution prescribes strict separation of religion and state. However, federal and state legislatures open their sessions with prayers, even though prayers are prohibited in government schools because of the constitutional injunction.

In 2000, Venkatachalapathi Samuldrala of Shiva Hindu Temple in Parma, Ohio, made the opening invocation in the House of Representatives in Washington. Zed said the opening prayers at the federal Senate in 2007 when it was disrupted by protesters from the public gallery.

A former candidate for the Republican Party’s presidential nomination, he had earlier called Hinduism “demonic.”