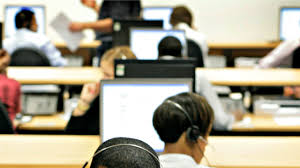 Thane, Oct 5 (IANS) In a massive operation, police busted at least nine call centres in Mira Road town and detained over 770 people for allegedly threatening US and other foreign nationals, police said here on Wednesday.

The raids, by a posse of around 200 police personnel, started late on Tuesday and continued till Wednesday.

According to police, the call centre employees reportedly posed as US Tax Department officials, forced the victims, mostly loan defaulters, to part with their confidential bank and financial details, or threatened them with penal action.

After the scared victims provided the details, the call centre employees managed to siphon off money from their bank accounts.

As per tentative estimates, the daily turnover from these fraudulent practices is pegged at a whopping Rs 10 million per day (Rs 1 crore daily), even as a probe is on to figure out the exact amounts that may be involved and number of people who have been defrauded.

The raids, directed by Crime Branch DCP Parag Manrere were simultaneously conducted in three multi-storied buildings and in the neighbourhood of the middle-class Naya Nagar locality of Mira Road with police collecting telephone and computer records, hard-disks and other evidences.

According to police, many of these call centres, targeting mainly US citizens, besides some other countries, were owned by nine persons and operational since over six months.

The data base from these call centres contained personal and financial details of several thousands of foreign and even Indian nationals which were utilised to trap their victims.

“The modus operandi of these call centres is identical but their owners are different with the involvement of hundreds of employees. We shall verify the role and antecedents of each and every person engaged in this racket,” Singh told media persons.

To a query, he said that if any foreign agency approaches, the Thane police would be prepared to share details of the crime with them.

The police is also seeking assistance from the Cyber Crimes Cell, IT experts and internet companies as VOIP was used to make internet voice calls to the victims to avoid tracing back the calling numbers, an official explained.

Many of the callers, including many women, were given a short training in phone etiquette and speaking in foreign accents to gain the victims’ confidence before trapping them into parting with their personal details.

While around 100 employees were questioned and released on Wednesday evening, others were still being interrogated by multiple teams of investigators.