After light refreshments, the music-lovers of Atlanta were treated to soul-touching,  spiritually elevating Sufi ‘Qawwali’.  To those unfamiliar with ‘Qawwali’ it is an Arabic word meaning “utterance.” It is the devotional music of the Sufi mystics of Pakistan and India. The term includes both the medium and its performance, and has been a dominant feature of their culture since the 12th century. Sufi music is appreciated by people from every faith and how it builds bridges across common boundaries of nationality, gender, class, ethnicity and religion, plus preferences in politics and culture. 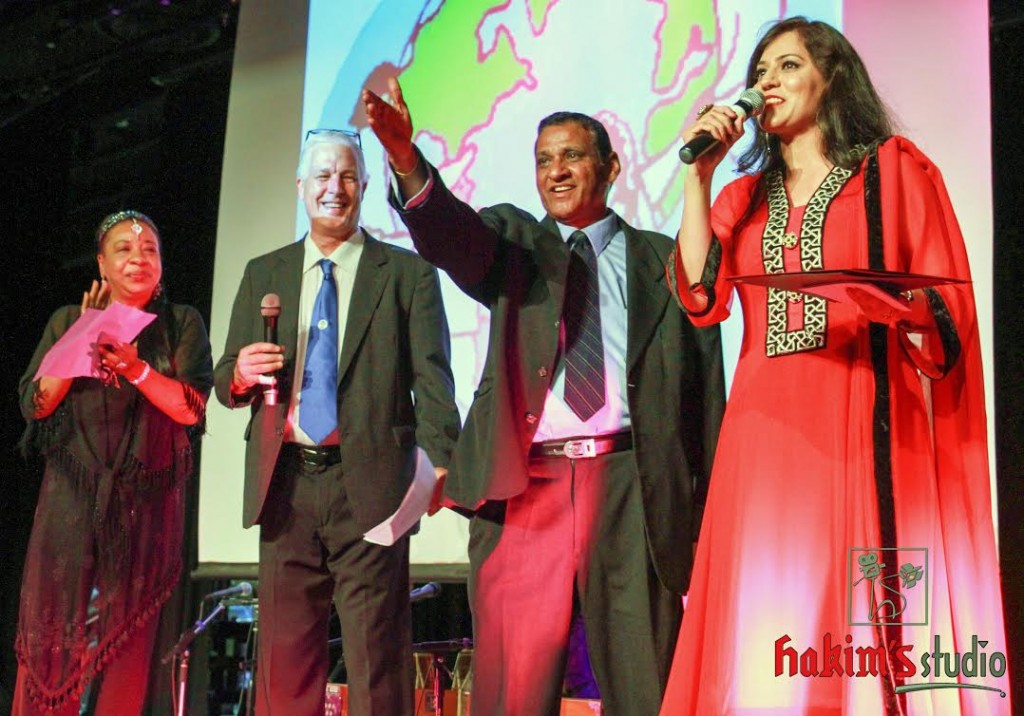 As Dr. Alan A. Godlas, UGA-Associate Professor in the Department of Religion noted: “The essence of Sufi practice is quite simple. It is that the Sufi surrenders to God, in love, over and over; which involves embracing with love at each moment the content of one’s consciousness (one’s perceptions, thoughts, and feelings, as well as one’s sense of self) as gifts of God or, more precisely, as manifestations of God.”

The program was emceed by Shaveta Jain, a former Mrs. India International and a social activist, who did an excellent job of creating the agenda and leading the production. Her professional poise, verve and beautiful dress helped the smooth flow of the program. After she welcomed all, she introduced Ms. Terry L. Hester, event organizer. Hester is a former VP for Atlanta: City of Peace, Inc. (ACP), and is Founder and CEO for “Unity in the Community” campaigns (UITC), an ‘at-will’ Community Organization dedicated to bringing multiculturals together to form bonds of peace. Hester read out the Letter of Celebration from Clarkston Mayor Ted Terry which stated, ”I would like to recognize and thank these international recording artists Mr. Ayaz and Mr. Muhammad for their service of creating ‘Unity within our community’ through their beautiful art of music… ‘Thank You’ for being Global Ambassadors for Peace!” 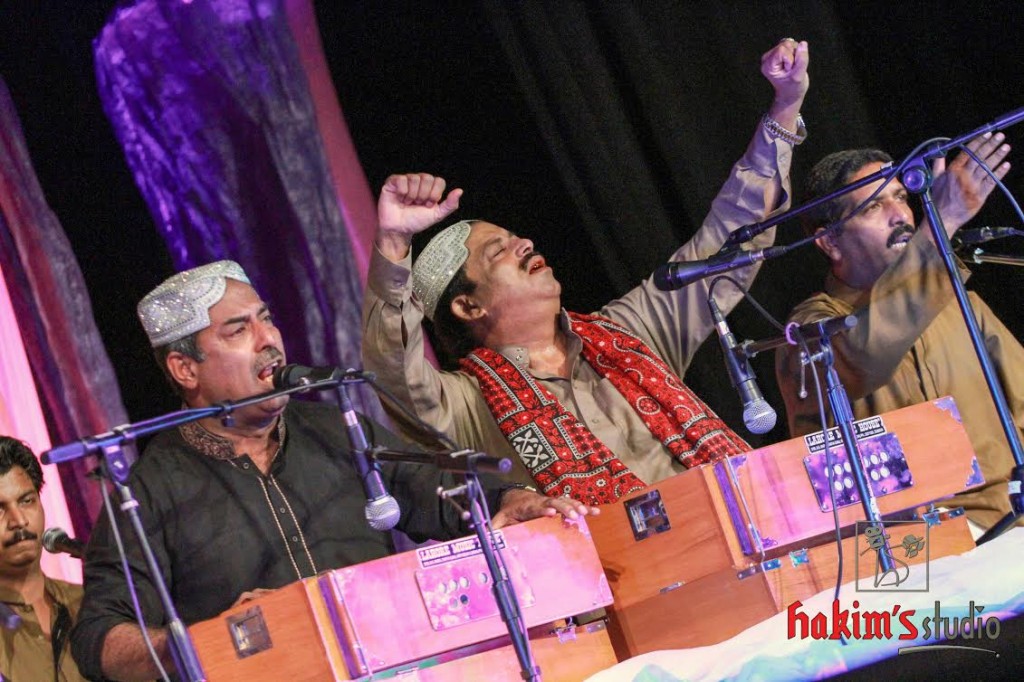 Hester then introduced GPM-Founder John R. Naugle who came to the stage and invited everyone to become co-creators and ambassadors of the Global Peace Museum. Shaveta then invited Dr. Hari Dayal, the band’s USA promoter, to the stage and he read out the inspiring proclamation from Kwanza Hall, an Atlanta City Council member, which read: “We extend a heartfelt welcome to your ensemble as you delight Georgians with your music. Mr. Ayaz and Mr. Muhammad are internationally-respected Sufi musicians whose singing is based on classical ragas. … Please accept my best wishes for a memorable concert.” 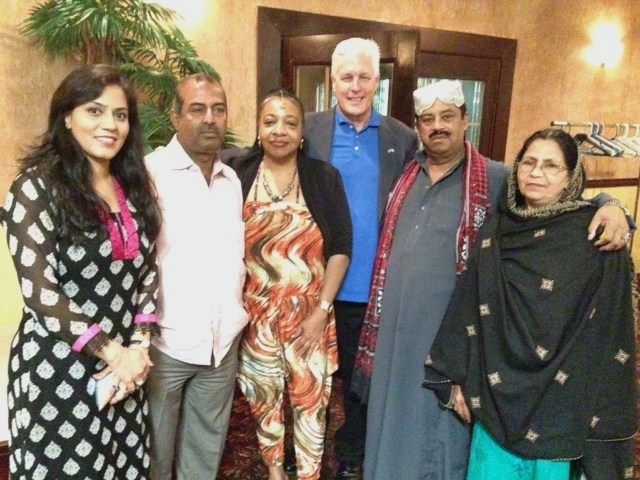 Shaveta also called to the stage the amazing Mustafa Ajmeri; event organizer and Atlanta’s performing arts supremo, plus India Tribune-Public Relations Rep, and the unofficial ‘Ambassador for the Global Peace Museum’. She also recognized and thanked co-founder and music director of Nritya Natya Kala Bharati, Sandeep Savla & A.V. Creations and Ejaz Naqvi who excelled in producing, respectively, the wonderful audio and stage design; and Sanjay Pandya of Davis Printing who provided the historic inaugural event program. Other major sponsors were also thanked for their help in propelling success for this first-ever GPM Fundraiser.

Finally, in advance of the main show, Aslam Pervez inspired the audience with a beautiful panegyric in his native language. His words celebrated the widely respected artistic talents of our featured international stars, Fareed Ayaz & Abu Muhammad.

Maestros Fareed Ayaz & Abu Muhammad’s Atlanta ensemble commenced singing, and the auditorium became quiet. Slowly the singing and music became hypnotic and elevating and transported the audience into realms of wonder. It was an indescribable bliss to be experienced. The positive vibes enveloped all. Their seamless switch from one language to another also wowed the audience and elicited huge applause. They performed beautifully and powerfully for almost 3 hours. Their band was composed of 9 musicians and their instruments included two harmoniums, one dholak, one electric ragini, and one tabla. The 2 stars were accompanied by a team of 7 other musicians: Ghulam Akram, Ghayoor Ahmed, Moiz Uddin, Mubark Hassan, Hamza Khan, Tahseen Fawad and Mustafa Khan. They performed about 11 songs.

According to Dr. Scott Kugle, Emory University Associate Professor of South Asian and Islamic Studies, “The artists, Fareed Ayaz and Abu Muhammad and party, are among the best singers of our era… Their late father, Munshi Raziuddin, was a wonderful artist and much-recorded singer. They are directly descended from the very first Qawwals of Nizamuddin Awliya in Delhi, over 700 years ago. Fareed Ayaz is an extremely knowledgeable person about Sufism and music. For those who love Qawwali, this was a rare opportunity.”

John R. Naugle, GPM-Founder said, “For Atlanta and the GPM to be blessed with an amazing Sufi performance of such an international and spiritual magnitude, during the 50th anniversary year of Dr. King’s Nobel Peace Prize (1964-2014) is such a wonderful gift to the attending audience, plus everyone who will come to learn of this. The GPM sends it sincere thanks and gratitude to Fareed, Abu and their inspiring musical ensemble”.

On the following day, Terry Hester commented,” Historically music has been the entity which has been used to heal, connect, and transcend many into higher levels of tolerance and understanding. Our ultimate goal was obtained last night as the message of peace-through-music was joyously received by all.”  b you did tonight. You were great!

To further support the efforts of the GPM, donate now at:

An elated John R. Naugle profusely thanked the participants, sponsors, volunteers and the audience and urged all to help in whatever way they can to make the dream of Global Peace Museum become a reality. 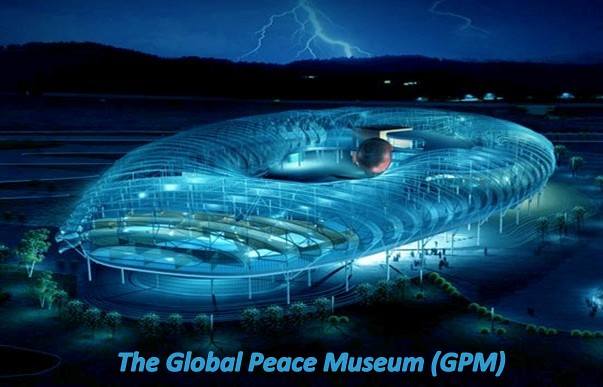 [The GPM will be developed next to “ATL” the world’s busiest airport, and also the Georgia International Convention Center. It will promote “Tourism: The World’s Biggest Peace Industry. Success with the GPM will propel Atlanta’s global peace legacy and help it to eventually become formalized as a global capital of peace so it may inspire our global family. Sponsors, supporters and stakeholders from around the USA & are invited/welcomed]

To further support the efforts of the GPM, donate now at:

Those who wish to learn more about  Fareed Ayaz, Abu Muhammad Qawwal & Bros.

The evening was a great success. A BIG word of thanks also goes out to the pre-show entertainment: to Hema Shilpa Uppala, founder of the Indian Classical Dance Academy and her talented students, plus Funda Yilmaz with her Veil Dance, and to Jaya Kamlani, for her beautiful singing.

Annakut Every Sunday at Hanuman Mandir