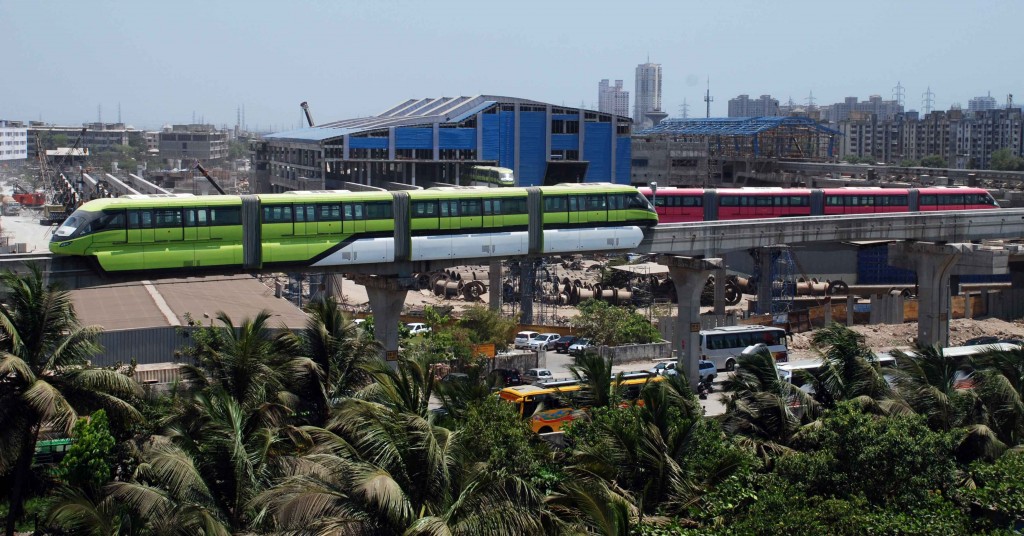 Mumbai, Feb 1 (IANS) The much-anticipated Mumbai Monorail – India’s first – was inaugurated here Saturday, with Chief Minister Prithviraj Chavan, Deputy Chief Minister Ajit Pawar and several media persons climbing aboard for the inaugural ride.
The 8.93-km-long Monorail, running between Chembur and Wadala in the east-south direction, comprising the first phase, will be open to the public from Sunday.
It would initially travel at a speed of 31 km per hour.
Usually, the Chembur-Wadala road journey takes around 60-70 minutes but the Monorail will complete it in just 20 minutes.
The second phase – connecting Wadala with Sant Gadge Maharaj Chowk in south Mumbai, a distance of 19.17 km – will be completed by mid-2015, said officials of the Mumbai Metropolitan Region Development Authority.
Costing a total Rs.3,000 crore, the fully-elevated Monorail has a minimum height of 5.5 metres and is higher in some sections.
The fully completed Chembur-Sant Gadge Maharaj Chowk corridor will be second longest Monorail corridor in the world after the 23.8-km Osaka Monorail in Japan.
The Wadala-Chembur section, that was thrown open, has seven stations en route – Wadala, Mysore Colony, Bhakti Park, BPCL, VNP-RC Marg Junction, Fertiliser Colony and Chembur.
The Monorail will also be cost-effective for commuters who can enjoy airconditioned comfortable travel with the minimum fare starting at just Rs.5. The fare will go up to Rs.11 for the full journey.
The Monorail comprises four colourful coaches – featuring sky blue, green and soft pink – that would stand out in the Mumbai skyline from all sides.
Each train is capable of ferrying 600 passengers.
The capacity can be enhanced to 900 with the addition of two more coaches in each Monorail in the near future when the speed would also be gradually increased to 80 km per hour.
From Sunday, the trains will be operated at an interval of 15 minutes and ferry around 2,500 passengers per hour, for eight hours from 7 a.m. to 3 p.m.
Later, the services are proposed to be increased to around 19 hours daily, from 5 a.m. to midnight, on the lines of the existing congested Mumbai suburban railways and BEST bus fleet.
The Monorail has generated immense excitement among Mumbaikars – comparable to the Rajiv Gandhi Bandra-Worli Sea Link opening in June 2009.
With comfortable, clean, quick, green, world-class commute at affordable rates, the Monorail will provide a crucial connectivity to areas not adequately serviced by the existing suburban railways network.
It will also complement the objectives of the upcoming Metro Rail that will link Versova-Andheri-Ghatkopar.