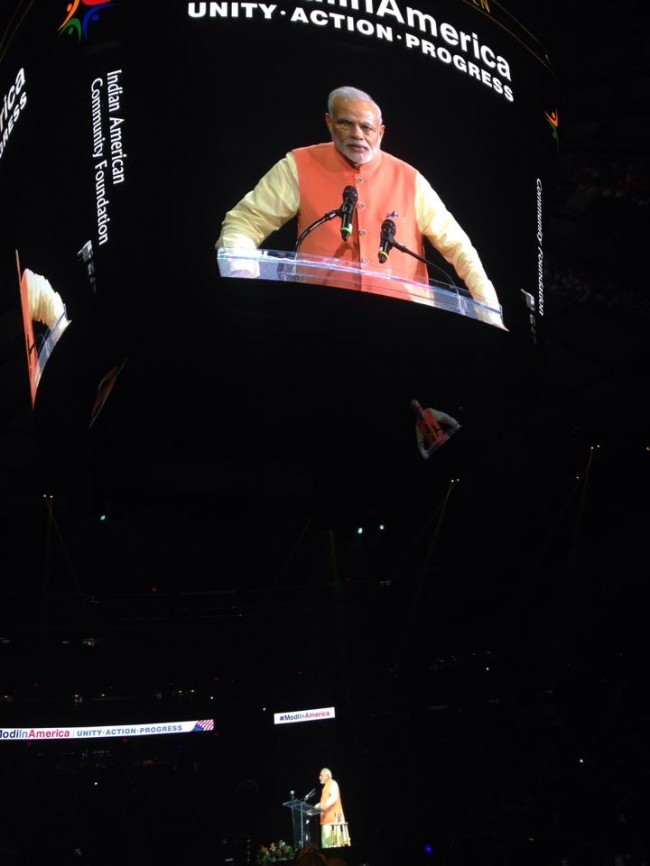 No other Indian leader has got this kind of love: Modi

New York, Sep 28 (IANS) Echoing the famous “I have a dream” words of former American civil rights leader Martin Luther King, Indian Prime Minister Narendra Modi told thousands of Indian Americans that “I have a dream (about India)” and “I will make the Bharat of your dreams.”

Concluding his hour-long address, Modi thanked the 20,000-strong gathering gathered at the Madison Square Garden for their love which he said had remained unstinted for almost 15 years.

“You have so much love for me, probably no other Indian leader has received this kind of love… Mein iska karz chukaoonga (I shall repay this debt), to make the the Bharat of your dreams,” Modi said, to loud chants of “Modi, Modi”.

“Together we will serve our country, for the motherland where we got birth and our learning,” he said.

He ended his speech by loudly saying Bharat Mata ki Jai” thrice, and asked the audience to raise their clenched fists in the air and repeat the invocation three times

“I Have a Dream” was a public speech delivered by Martin Luther King on Aug 28, 1963, in which he called for an end to racism in the US. Delivered to over 250,000 civil rights supporters from the steps of the Lincoln Memorial during the March on Washington, the speech was a defining moment of the American Civil Rights Movement.

New York, Sep 28 (IANS) At an opportune cusp of circumstances, blessed with a vibrant democracy, with 65 percent of its people under the age of 35, and a market of 1.25 billion people, India will scale new heights in the near future, Prime Minister Narendra Modi said Sunday.

Addressing an around 20,000-strong gathering cheering Indian diaspora at Madison Square Garden, Modi said India is the youngest nation in the world and also the country with an ancient civilisation.

He said 65 percent of the people are under the age of 35 and with the IT ability of Indians “there is no need for such a country to turn back and look”.

Modi said it is “important to recognise our strengths and mobilise them to go forward fast”.

Referring to the elections, in which he led the Bharatiya Janata Party to power, Modi said the 1.25 billion people of the country had given their blessings to govern and it was akin to god’s own blessings.

He said democracy is India’s biggest strength and also its demographic dividend.

The third advantage is the demand – “the entire world has its sights on India and it knows that its 1.25 billion people is a huge market”, he said.

“Happy?” he asked as the crowd cheered his announcement with chants of “Modi, Modi”.

“There is even more to come,” he said smilingly.

He announced that NRIs staying in India for long had to visit the police station, and “there is no need for them to do that anymore”.

Modi said the government will join the People of Indian Origin (PIO) and Overseas Citizenship of India (OCI) schemes for the diaspora and a new scheme would be announced soon.

He also said the Indian missions in the US would grant long term visas to US citizens and US tourists would get visa on arrival in India.

Getting rid of maze of laws: Modi at Madison

New York, Sep 28 (IANS) Taking a swipe at the Congress-led UPA, Prime Minister Narendra Modi said the earlier governments would keep harping on the number of laws they had come out with, but he has made it his mission to get rid of the “maze” of “useless” ones.

Addressing a gathering of thousands of the Indian diaspora at Madison Square Garden, Modi said: “Earlier governments would keep harping that we have made this ‘kanoon’ (law) and that ‘kanoon’.. I have started a new one – the old ‘kanoon’, I have thrown away the ‘bekaar’ (useless) ones.”

“It was like a ‘jaal’ (maze) of ‘kanoon’, if one gets in, then they cant get out. I have set up a committee to examine them. If everyday, I can end one law, then it will be an achievement,” he said to loud chants of “Modi, Modi”.

He said good governance should be of easy ways for the people, to fulfil the people’s needs in an easy, lucid way.

New York, Sep 28 (IANS) India was once known as a world of snake charmers, now the magic that its people have woven “with the mouse” in the IT sphere is world-renowned, said Prime Minister Narendra Modi here Sunday.

“I was in Taiwan some years ago, someone wanted to ask a question and was hesitating. He asked if I won’t feel bad, I said go ahead. He said I heard India is a land of black magic and snake charmers. I said no, our forefathers maybe would play with snakes but we play with the (computer) mouse,” he said in his address to a gathering of Indian diaspora at the Madison Square Garden.

Winning elections is not for sitting on a seat but a responsibility, he said, noting that he has not taken even a 15-minute vacation since taking over the helm of the country.

To loud chants of “Modi, Modi”, the prime minister said the people of India and the diaspora have conveyed the strength of democracy through the April-May elections, which saw the Modi-led Bharatiya Janata Party sweep to power.

“I will not do anything to make you lower your head. The government you have chosen will not leave anything out,” he said to loud cheers from the huge gathering.

Tips for Travelers with Diabetes