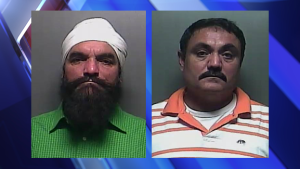 Washington, July 30 (IANS) Two Indian Americans have been charged with stealing thousands of dollars worth of fuel to benefit their own truck company in Greenfield in the US state of Indiana, a media report said.

Authorities charged Jaswinder Singh, 58 and Harpreet Sandhu, 53, with making multiple trips to a fuelling station in Greenfield to steal nearly 1,800 gallons of diesel from an underground tank, FOX 59 TV reported on Thursday.

A police officer patrolling the area arrested the duo in May after they were caught stealing fuel from the tank.

An inspection of the truck revealed that it had holes cut in the floorboards, allowing hoses to reach down into the tank.

The hoses were attached to battery-powered pumps, which police said allowed the men to pump the fuel into a 1,500 gallon tank in the back of the trailer.

Later, phone records showed that Singh and Sindhu were in Greenfield at the time of previous three fuel thefts at the station.

The value of the fuel stolen by the duo was calculated to be in excess of $6,500, according to police.

Investigators said the two men were using the fuel to benefit their own truck business, California Freight, based in Whiteland.